Efforts to expand market access for agricultural products typically focus on reducing tariffs and other border measures that impede trade. In India and other emerging markets, however, high internal marketing costs and marketing margins—or returns to importers, wholesalers, and retailers over and above their costs—can also be an important barrier to trade.

Strong income growth in India is projected to lead to continued expansion of apple demand and imports, including imports of U.S. apples. But high domestic prices of both domestic and imported apples, compared with other Indian fruit, are likely to limit demand growth among middle- and lower-income consumers who make up most of India’s population. Even though India’s 50-percent import tariff on apples is one of the highest in the world, high marketing margins account for the largest share—about half—of the consumer price of both domestic and imported apples in India. As a result, increased investment and competition in the domestic supply chain is likely to be particularly effective in boosting apple demand and imports. 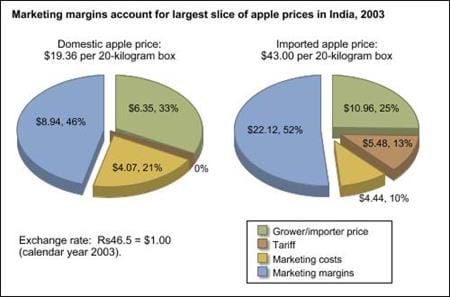 Behind India’s high marketing margins and costs is an array of factors related to the stage of economic development typical of emerging markets. The presence of relatively few importers in each of India’s major markets and secretive bidding practices common in markets for domestic and imported apples provide an opportunity for traders to maintain high margins. Fragmented supply chains—typically including four to five intermediaries between the grower/importer and the consumer—result in a compounding of margins. Also, heavy regulation, high capital costs, and limited demand for high-value goods have constrained private investment in market infrastructure and the emergence of vertically integrated marketing firms.

Risk and uncertainty faced by importers, particularly regarding enforcement of nontariff import regulations, may also contribute to importers’ demands for higher margins. India eliminated quantitative restrictions on apple imports in 1999 but imposed a 50-percent tariff and nontariff measures, including phytosanitary, pesticide residue, and food safety regulations. Some of India’s requirements for apple imports, such as those pertaining to waxing and chemical residues, differ from U.S. and international standards. Although these regulations appear to have had little effect on India’s apple trade so far, uncertainty regarding the rules and their enforcement could be disruptive and costly for traders.

Success in reducing India’s marketing margins and its high tariff are likely to benefit U.S. apple producers, as well as Indian producers and consumers. U.S. apples have been highly competitive in the Indian market on the basis of both price and quality, earning about 31 percent of India’s import market during 1999-2004, the largest share of any supplier.