The homeownership rate in America is at a record high (69 percent of households). Whether in rural or urban areas, most home purchases are financed by a home mortgage. For rural homeowners, however, mortgage rates are often higher than for urban homeowners, and lenders may impose more stringent requirements for financing a rural residence.

According to data through 2004 from the Monthly Interest Rate Survey, the effective nonmetropolitan (nonmetro) interest rate on conventional fixed-rate home mortgages remains somewhat higher than the metro rate. However, the gap between nonmetro and metro rates has narrowed since 1995. This effect is mirrored by a growing convergence in the terms to maturity for rural and urban home mortgages. By 2004, the average term of nonmetro mortgages (26.4 years) had increased to almost the same average term as metro mortgages (26.9 years).

The apparent narrowing of differences in the cost of conventional home loans does not necessarily mean that rural and urban households have similar access to financing. Underwriting standards may make it more difficult to qualify for financing on a rural residence. For example, underwriters may not finance a rural mortgage if the prospective residence lacks a nearby water hookup for fire and emergency services. Also, a larger share of nonmetro residences consist of manufactured/mobile homes, which are generally financed by loans with shorter terms and much higher effective interest rates than those with conventional home mortgages. (In 2003, 14 percent of nonmetro and 5 percent of metro households lived in manufactured/mobile homes.) 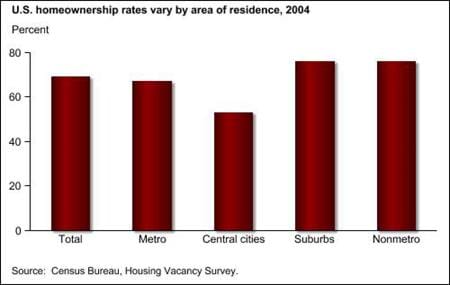 Data from the 2003 American Housing Survey show that 13 percent of nonmetro homeowners and 21 percent of metro homeowners had primary mortgages either guaranteed or financed directly by the Federal Government. USDA and the U.S. Department of Housing and Urban Development are the primary Federal agencies providing housing assistance programs for low-income renters and owners. In rural America, USDA’s section 502 single-family housing program promotes home purchases by providing (1) a reduced interest rate, direct-loan program restricted to low-income persons who cannot qualify for loans from private lenders, and (2) a loan-guarantee program that guarantees repayment of market-rate home mortgages made by private lenders to mostly moderate-income borrowers. Such programs can help mitigate some of the cost differences between rural and urban home financing.