Severity and Concentration of Persistent High Poverty in Nonmetro Areas

The incidence of poverty is commonly used as an indicator of economic well-being for places or groups of people. But a simple dichotomy of poor versus not poor at a given time may conceal much that would broaden our understanding of poverty. For example, the poverty rate does not reveal the degree of severity or concentration of poverty, or the size of the population whose income is only marginally above the poverty level. Nor does it show whether an area’s poverty level is an unusual and temporary condition or a longstanding pattern.

ERS defines counties as persistently high poverty areas if 20 percent or more of their population had poverty-level incomes in each of the four decennial censuses since 1970. The Census Bureau establishes the poverty threshold, which varies by the number and age of persons in a household and is adjusted from census to census to account for changes in the cost of living. The poverty threshold in the 2000 Census for a family of four, with two children under age 18, was an annual income of $16,895 in 1999. For an individual under age 65, the threshold was $8,667.

Of the 340 nonmetro counties with persistent high poverty in 2000, the overwhelming majority were in parts of the U.S. where poverty primarily reflects conditions among racial/ethnic minority groups or the predominantly White population of the Southern Highlands (mostly Allegheny and Cumberland Plateau counties of Kentucky and West Virginia, plus parts of the Ozark Plateau and Ouachita Mountains west of the Mississippi). These counties contained a fourth of the total nonmetro poverty population in 2000.

In the persistent high-poverty counties, 26 percent of the total population in 2000 were in households with incomes below the poverty line, with 12 percent in “severe poverty” (a term used to define those with incomes less than 50 percent of the official poverty threshold). Thus, nearly half of the poor in these counties were not merely poor but severely poor, even after accounting for any possible receipt of cash public assistance or Supplemental Security Income. 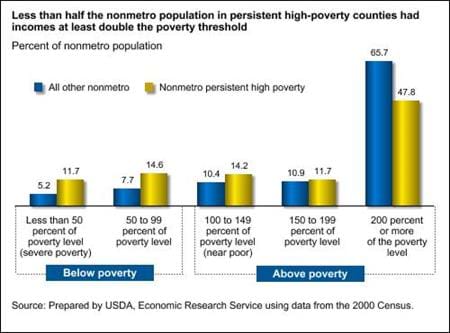 Although the characteristics of racial/ethnic minorities in persistent high-poverty counties vary from group to group, the incomes of these minority groups as a percentage of the poverty level are rather similar. The one notable exception is that Hispanics were less likely than Blacks or Native Americans to be severely poor, and they had a slightly higher inclusion at each income group above the poverty level. All three minority groups in persistent high-poverty nonmetro counties had overall poverty rates of 32-40 percent—more than double the U.S. nonmetro rate of 15 percent—with an additional 17-19 percent in “near poverty” (a term used to define those with incomes 100-149 percent of the poverty level). 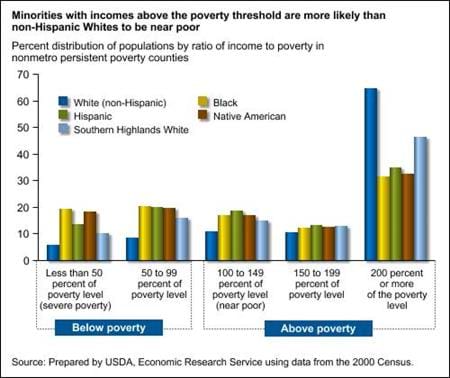 Among all nonmetro poor people, minority populations are much more likely than non-Hispanic Whites to be concentrated in areas where the overall poverty level is persistently high. Over half of all nonmetro poor Blacks and Native Americans live in such areas, as do nearly 30 percent of all poor Hispanics. But only a seventh of poor non-Hispanic White households live in a milieu of widespread and persistent poverty, notwithstanding the regional concentrations of White poverty in the Southern Highlands. Thus, the local economic and social context of poverty may be more difficult and limiting for the nonmetro minority poor than it is for poor non-Hispanic Whites. 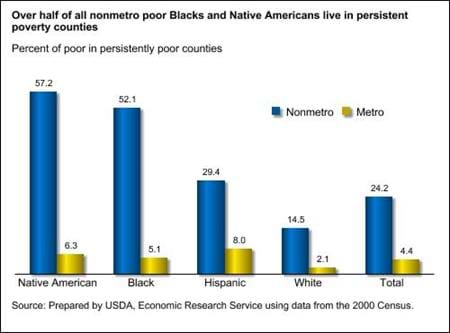