by Barry Krissoff and Maurice Landes

Marketing costs and margins—the difference between prices paid by importers and those paid by consumers—can be at least as effective a barrier to trade as tariff and nontariff measures. Marketing costs include packing, handling, transport, storage, losses, fees and taxes, and other charges involved in moving agricultural products from port to retail market. Marketing margins reflect the portion of the difference between importer and consumer prices not accounted for by marketing costs. These include returns (or profits) to international traders, wholesalers, retailers, and other intermediaries in the supply chain, as well as unaccounted costs. Investments in supply chain infrastructure and competition among firms tend to reduce marketing costs and margins.

ERS estimated the marketing costs and margins for two countries that protect their apple markets from foreign competition through high tariffs and nontariff barriers: Japan and India. Estimates for Japan were based on data from the USDA’s Foreign Agricultural Service (FAS) office in Tokyo and reflect conditions in 2001––Japan did not import U.S. apples between 2002 and 2004. FAS sources included Japan’s customs trade statistics and information from Japanese traders. Data on India’s apple market were obtained from published sources of market price data and interviews with growers, contractors, wholesalers, and retailers of U.S. apples sold in the Delhi market during 2003. 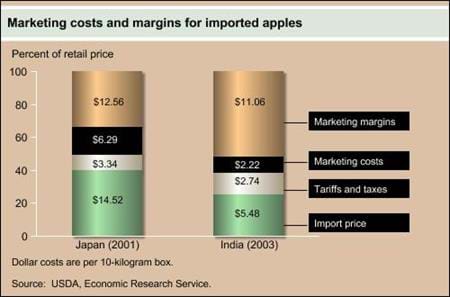 For Japan, the import price of a U.S. apple accounts for the largest share of the consumer price of imported apples—about 40 percent. Marketing margins received by importers, wholesalers, and retailers equal 33 percent of the retail price. Costs of customs storage and clearing, transportation to the wholesaler and retailer, and repacking into smaller units before delivery to supermarkets total about 17 percent of the consumer price. Japan imposes a 17-percent ad valorem import tariff and a 5-percent consumer tax (at the border and on top of the tariff), which together total approximately 9 percent of the retail price for apple imports.

In India, margins account for the largest share of the consumer price for imported apples––about 51 percent. The import price accounts for the next largest share of the consumer price, about 25 percent, and India’s high, 50-percent tariff on imported apples accounts for about 13 percent. Estimated marketing costs account for the remaining 10 percent. Marketing costs are low because there is no grading, processing, packaging, or other forms of value addition in the Indian marketing chain, and because traders report negligible losses in marketing imported apples. In emerging markets such as India, the lack of investment in infrastructure and the lack of competition may result in relatively high costs and margins.

Marketing margins—profits and unaccounted costs in the marketing system—account for a large share of the consumer price of imported apples in both Japan and India. Measures to reduce margins, possibly through increased competition or more integration of the various stages in the supply and marketing system, could lead to lower retail prices and higher demand for imported apples. In these cases, the impact of tariffs on trade appears less significant than that of marketing margins and costs, but high tariffs—by raising the price—have a cascading effect on costs and margins, and may also inhibit competition that would reduce margins.