Farming is a risky business. Sharp changes in farm production or farm prices, driven by the vagaries of weather and disease, sudden shocks to export markets, or the introduction of new technologies, can lead to striking changes in a farmer’s income in a short period of time. Agricultural contracts can shift such risks from farmers to contractors, and facilitate farm expansion. For these reasons, more and more farm output is being produced under contract. But farmers who contract often give up something they prize—the autonomy that comes with making management decisions.

Agricultural contracts are agreements between farmers and their commodity buyers that are reached before harvest or the completion of a livestock production stage. They govern the terms under which products are transferred from the farm, and might specify the date of delivery, product price, and required production practices. Contracts create closer linkages between farmers and specific buyers, and may afford the contractor (buyer) greater control over agricultural production decisions.

The growth in contracting has come largely at the expense of spot (or cash) markets, where farmers retain full autonomy and receive prices based on prevailing market conditions and product attributes at the time of sale. In the case of hogs, the risk reduction provided by contracts is valuable to risk-averse farmers, who seek to avoid widely fluctuating input and output prices. But hog farmers also appear to value autonomy highly—ERS research shows that a moderately risk-averse producer would need to be paid a price premium of nearly 12 percent to give up the autonomy of independent production.

While the share of farms that contract has remained steady, the share of production under contract has grown. In 2003, only 1 in 10 U.S. farms held a contract—a share that has remained stable since at least 1991. However, contracts covered 39 percent of the value of agricultural production in 2003, up from 11 percent in 1969, 28 percent in 1991, and 36 percent in 2001. Large farms are far more likely to use contracts. Only 6 percent of small farms (sales under $250,000) used contracts in 2003, compared with more than 60 percent of very large farms (at least $500,000 in sales). In turn, contracts covered 20 percent of production from small farms and just over half of all production from very large farms. Contracts offer several advantages to food buyers. First, they can be used to ensure uniformity in commodity attributes, stabilize production volumes, and induce the spread of improved varieties, leading to reduced production and processing costs and lower consumer prices. Second, because contracts are frequently used to coordinate the production of differentiated products (such as high-oil corn, branded lean beef, or organic produce), they can expand the variety of food and agricultural products.

Contracts can have subtle and far-reaching impacts on farmers and the organization of farming. Here, we focus on the effects of contracting on a farmer’s income risk, and the associated impacts on farm structure and farmer autonomy.

Income from farming is risky. Price risks arise from unanticipated changes in output or input prices, while yield (production) risks result from unpredictable events (like drought, flood, pest infestations, or disease) that affect the quantity of production.

The hog market provides a striking example of price risks, as embodied in average prices for finished hogs (the value of production per hundredweight (cwt)), total costs, and net returns for a typical independent feeder-to-finish producer from 1993 to 2003. Feeder hogs usually weigh about 50 pounds, while finished hogs usually weigh about 250 pounds. Prices for finished hogs ranged from over $65/cwt to less than $17/cwt (in 1998 dollars) from 1993 to 2003, and usually varied by $10-15 during any given year. Costs, largely driven by fluctuations in feed and feeder pig prices, ranged from $30/cwt to $55/cwt, and fluctuated widely during any single year. Consequently, net returns varied widely over 1993-2003: farmers who added 200 pounds per hog earned up to $32 per hog, but also could have lost as much as $35. With most production now on farms marketing more than 5,000 hogs a year, these fluctuations imply substantial income risk.

Risk can reduce farm production and efficiency and lower farm household income. Years with low returns (such as 1998-99) can lead to farm business failure and to financial stress for households without income from other farm enterprises or off-farm work. Banks may be reluctant to advance credit to businesses in extremely risky markets, or during downturns. Greater price risks require farmers to devote more time and effort to marketing decisions that could otherwise be devoted to farm production or family. Farm operator households can limit their exposure to risks by altering production techniques, diversifying the farming operation, combining on-farm and off-farm work, or by using contracts that shift risks to buyers. Marketing contracts can also greatly reduce a farmer’s output price risks. Forward marketing contracts, frequently used in grain and livestock production, establish a base price before harvest and commit the farmer to delivery of a given quantity within a specified time. Forward contracts can set an exact price, or they can set a “basis” price, tying a contract price to a price in the futures market, plus or minus a specified amount (the basis). Farmers can then offset the price fluctuations in the contracted crop by hedging with the purchase of a futures contract, thus eliminating price risks.

Marketing contracts can also mitigate risks from input prices and yields. Product payments can be based in part on input prices. Some crop contracts commit farmers to deliver the production from a particular acreage rather than an outright quantity. Under such acreage contracts, the producer still obtains revenue only from the amount delivered, but does not have to make up production shortfalls by buying in the cash market to fulfill contract terms.

Contract producers in any given commodity tend to be much larger than independent producers. Recent research suggests that contracts can facilitate farm expansion, partly through risk reduction.

By reducing price risks, production and marketing contracts can make it easier for farmers to obtain credit and thus expand operations. Banks lend more to contract producers than to independent producers, even when producers have the same amount of financial wealth. Because contract producers can call on greater financial resources, they can generate significantly more production than independent producers who have similar levels of wealth. For example, among the least wealthy farmers, contract producers are able to obtain $1.60 in loans for every $1.00 in wealth, while independent producers from the same wealth group borrow $0.40. Production contracts almost eliminate the need for short-term credit to finance operating expenses, thereby allowing the farm to redirect some borrowing to other farm activities. Since very large farms tend to be operated by households that derive most of their income from farming, contracts also serve to reduce household income risks from operating at such a large scale. As a result, expanding use of contracts may be one factor driving the shift of production to larger farms.

Since risk reduction benefits farmers, we would expect them to pay something for it; that is, we would expect them to accept contracts offering lower returns than they could expect from independent production. However, our research shows that contract production (lower risk) frequently yields higher returns than independent production (greater risk), even when contract and independent operations produce very similar products. At first glance, this suggests either that farmers do not value risk reduction or that contract operations produce output of superior quality. A more plausible explanation is that contracts force farmers to give up their highly prized autonomy—and farmers must be paid to do that. 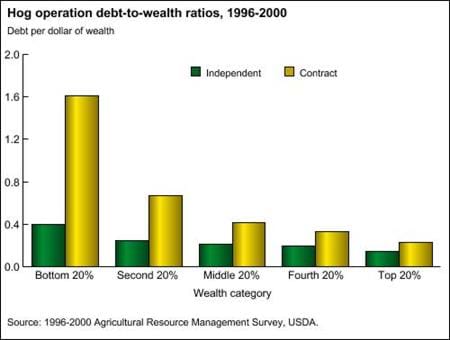 ERS recently investigated the tradeoff that hog farmers make between risk reduction offered by contracts and loss of autonomy. The evidence suggests that farmers place great value on both autonomy and risk reduction. A risk-averse farmer is willing to accept a lower average income in exchange for less income variability. Comparing the variation in net returns under independent and contract hog production, we estimate that the risk reduction offered through a typical production contract was worth about $2.61/cwt to a moderately risk-averse farmer, or 4.9 percent of the average price for market hogs during the 1990s.

To estimate the value farmers place on autonomy, we used USDA’s Agricultural Resource Management Survey of hog producers to estimate the difference in net returns between contract and independent production. If risk reduction was the only factor influencing farmers, we would expect contractors to offer lower prices to contract producers, and contract producers would realize lower returns from hog production than independents. But instead, our estimates indicate that for moderately risk-averse farmers, the expected return from contract production exceeded the expected return under independent production by $3.68/cwt. Since we might expect hog farmers to willingly give up $2.61/cwt for the risk reduction provided by a contract, and we find that they instead receive a premium of $3.68/cwt to accept a contract, the difference between the two estimates ($6.29 per cwt) reflects the value of autonomy.

Farmers are not unique in valuing autonomy highly; other studies have demonstrated individuals’ willingness to pay for the opportunity to be self-employed and make management decisions. For example, a recent study of nonagricultural employment found that individuals were willing to give up about 35 percent of their income in order to be self-employed rather than to be paid employees.

Farm production is shifting from smaller to larger family farms and from spot markets to contracts. Technological developments may underlie much of the shift to larger farms, but expanded use of production and marketing contracts supports that shift by reducing financial risks for farm operators. For farm operators, contracts provide benefits from reduced risks, but also impose costs from loss of managerial control and reduced autonomy.

However, the gains to contractors from contract production have been substantial enough to support the additional compensation that must be offered to farmers to surrender some of their autonomy under contracts. With substantial gains to contractors, continued expansion of contracting is likely, with its associated implications for farm size and for farm operator risks and returns. In some commodities, that expansion may build on itself and accelerate: as spot markets in some commodities become quite thin, even producers who would prefer to farm independently and use spot markets may seek contract alternatives. In turn, USDA price reporting systems, traditionally based on spot market transactions, may need reconfiguring to deal with markets in which most transactions occur through contracts.

<a name='box'></a>Production and Marketing Contracts Defined

ERS analyses distinguish production contracts from marketing contracts. Under a production contract, the farmer provides services to the contractor, who usually owns the commodity under production. For example, contractors in poultry production usually provide chicks to the farmer, along with feed and veterinary/transportation services. The farmer then raises the chicks to maturity, whereupon the contractor transfers them to processing plants. Contractors often provide detailed production guidelines, and farmers retain far less control over production decisions. The farmer’s payment resembles a fee paid for the specific services provided, instead of a payment based on the market value of the product.

Marketing contracts focus on the commodity as it is delivered to the contractor, rather than the services provided by the farmer. They specify a price or a mechanism for determining the commodity’s price, a delivery outlet, and a quantity to be delivered. The pricing mechanisms sometimes limit a farmer’s exposure to price risks, and they often specify price premiums to be paid for commodities with desired levels of specified attributes (such as oil content in corn, or leanness in hogs). The farmer retains control over major management decisions and hence retains more autonomy than is available under production contracts. A forward marketing contract, frequently used in grain and livestock production, typically establishes a base price before harvest and provides for delivery of a given quantity of a good within a specified time. A futures contract is an agreement to trade a commodity with specified attributes at a specified time. Futures are distinguished from generic forward contracts in that they contain standardized terms, trade on a formal exchange, and are regulated by overseeing agencies.