by Gary Vocke and Mir Ali

The U.S. wheat sector is facing decreased demand and increased competition. Domestic food-use demand has fallen over the past decade as consumer preferences have changed, and the sector faces strong competition in export markets. Subsequent low returns relative to other crops have led to the substitution of competing crops for wheat in many areas, particularly in the Plains States. U.S. wheat planted area in recent years is about 30 percent less than in the early 1980s. In the future, downward pressures on wheat plantings can be expected to continue, as total returns (sales plus government payments) favor other crops, and export and domestic demand for wheat remains modest. However, low stocks and wheat prices above $3 per bushel will prevent a dramatic decline in acreage.

These challenges are particularly severe for farms that depend upon wheat for over half of their receipts. These specialized wheat farms are concentrated in the Great Plains and the Pacific Northwest and account for over 40 percent of total wheat production. 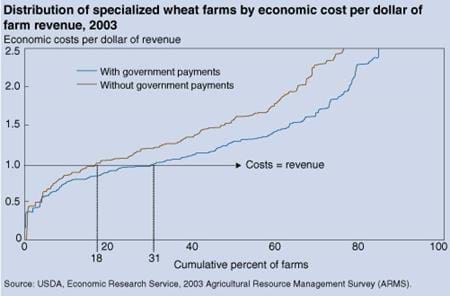