by Sophia Huang and Fred Gale

China’s emergence as a fruit and vegetable exporter presents a new source of competition for U.S. producers. China’s fruit and vegetable exports have increased most rapidly in three categories: apples, apple juice, and fresh vegetables. Since 2003, China’s apple exports have surpassed those of the United States and have made inroads into major U.S. export markets in Asia. China is now the world’s leading exporter of apple juice, and U.S. apple juice producers face both import competition and loss of export markets. China’s exports of processed fruits and vegetables do not yet pose a serious challenge to the United States, because the two countries do not export the same types of products. However, China’s rising exports of fresh vegetables have begun to compete with U.S. exports to Asian markets, and in some cases U.S. market shares have slipped.

However, such rapid export growth on the part of China may not be a long-term phenomenon. Growing domestic demand for fruits and vegetables is likely to reduce the supply available for export. As Chinese household incomes rise, fruit and vegetable consumption will rise, as will the variety demanded. Several important U.S. horticultural products are already popular among high-income Chinese households. Moreover, as the growth in the Chinese economy deepens, income gains will be spread more widely over the Chinese population. In the coming years more households will likely emulate the consumption patterns of the top-earning households, and Chinese consumption of fruits and vegetables could rise sharply. 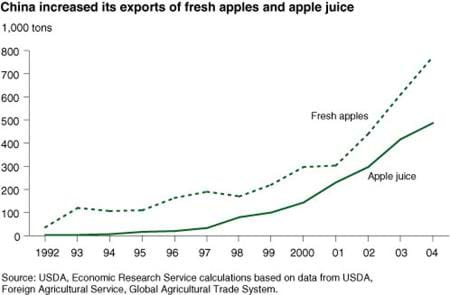 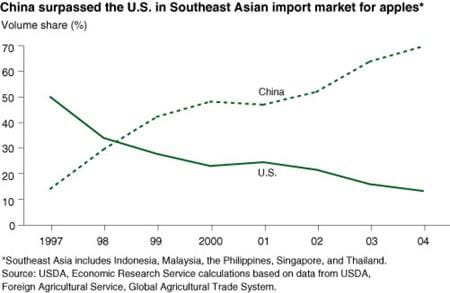 China’s fresh vegetable exports include a wide variety of products grown in coastal regions, often under contract for Japanese or other Asian companies. Many vegetable products exported by China are different from those exported by the United States. But as China’s fresh vegetable exports have diversified, they present more competition to U.S. exporters. Exports of onions, carrots, cauliflower, and broccoli grew from just a few thousand tons in 1992 to a combined total of over 1 million tons in 2004, making China the largest supplier in some Asian markets. Other prominent vegetable exports include garlic and mushrooms. 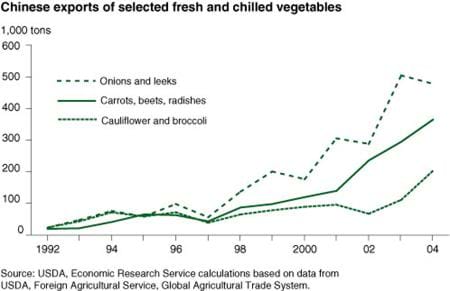 China’s vegetable exports compete with U.S. products primarily in Japan and, to a much lesser degree, South Korea. China surpassed the United States as the leading fresh vegetable exporter to Japan in 1996. It is the dominant supplier to Japan of imported garlic, peas, leeks, radishes, and mushrooms. China’s share of Japan’s imports of carrots, onions, and broccoli also grew rapidly over the past decade, and these are displacing U.S. products. 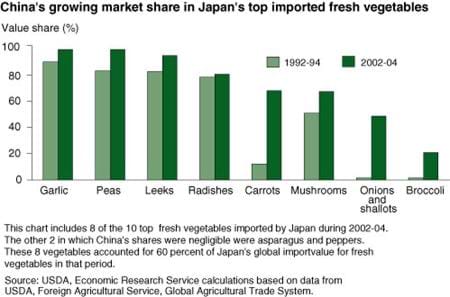 China emerges as a market for U.S. exports of fruits and vegetables 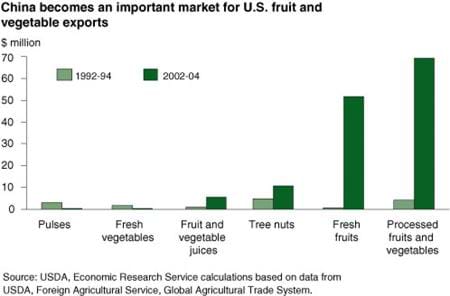