Since 2004, Brazil has been the world’s largest beef and poultry exporter and fourth-largest pork exporter, with total meat sales generating over US$8 billion in 2005. Exports have been driven by the combination of rising incomes in many parts of the world and Brazil’s ready availability of land and feed resources to support meat production. 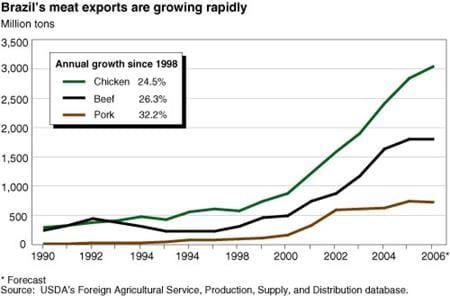 Brazil is now the world’s largest beef-exporting country by volume (second largest by value, behind Australia). The presence of foot-and-mouth disease (FMD) in the country, sanitary problems associated with cattle slaughter, and sales of lower value cuts account for Brazil’s lagging in export value (per ton) relative to exporters from North America and Oceania. FMD also prevents Brazilian exports of fresh, chilled, and frozen beef to important North American markets—the U.S., Canada, and Mexico—as well as Japan, South Korea, and Taiwan. Chilled, fresh, and frozen exports account for just over 80 percent of Brazil’s beef trade and prepared/preserved beef accounts for nearly 20 percent. Major markets for Brazil’s beef exports include the EU-25, Russia, and Chile, while the EU and the U.S. accept processed beef.

Brazil is the world’s third largest pork exporter, accounting for 15 percent of global pork trade. Pork exports are largely frozen cuts, and Russia is the primary market (65 percent in 2005). Other export destinations are Hong Kong, Ukraine, and Argentina.

Despite a new outbreak of FMD in 2005 that led several countries to ban meat imports from regions affected by the disease, Brazil will remain a significant player in world meat markets. Future increases in meat exports and greater access to the global market will depend on the success of current efforts to improve its disease status and Brazil’s ability to implement and maintain sanitary controls.