Agriculture and Rural Communities Are Resilient to High Energy Costs

Higher energy costs in the 1970s prompted all sectors of the U.S. economy to increase energy efficiency. Agricultural producers responded by making tradeoffs—replacing more expensive fuels with less expensive fuels, shifting to less energy-intensive crops, and employing energy-conserving production practices where possible. Energy intensity—defined as energy consumed per unit of total output—has steadily declined over time due to gains in energy efficiency in the agricultural sector, and this trend is likely to continue.

Nominal energy prices have been steadily increasing, although inflation-adjusted energy prices have remained largely unchanged until recently. In the agricultural sector, energy expenditures for gas, diesel, electricity, and other inputs have increased over time and vary by major commodity produced. However, the U.S. Department of Energy expects the prices of crude oil and gas to decrease in 2006-07 by roughly 5 and 3 percent, respectively, but expects the price of natural gas to rise by over 6 percent.

Rural communities face somewhat different issues associated with increases in petroleum and natural gas costs. As energy prices rise, so do household costs for transportation and home heating. Rising fuel costs also could discourage people from vacationing in or moving to rural areas, particularly remote areas far from major services and employment centers. Because rural households tend to have higher travel expenses—simply because they travel longer distances—they are more likely to be affected by increases in gas prices than urban households. 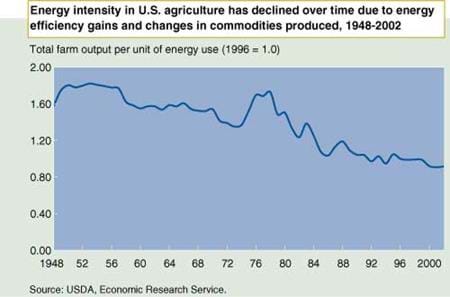 Direct energy consumption in the agricultural sector includes use of gas, diesel, liquid petroleum (LP), natural gas, and electricity. Indirect energy use involves agricultural inputs, such as nitrogen fertilizer, which have a significant energy component associated with their production. Since 1992, direct fuel and electricity expenses for U.S. farms have averaged around 7 percent of total operating costs. Diesel fuel and gasoline are widely used for tillage, planting, transportation, and harvesting. Electricity, LP, gas, and natural gas are primarily used in drying; irrigation; operation of livestock, poultry, and dairy facilities; and onfarm processing and storage of perishable commodities. Expenses from indirect energy use increase total energy expenditures to 15 percent of operating costs. Fertilizers embody the most energy among production inputs because natural gas is the primary input (70-90 percent of the cost of producing nitrogen fertilizer).

Variation in the regional distribution of energy input costs suggests that changes in energy prices would most affect producers in regions where irrigation is indispensable for crop production. Corn, soybean, wheat, cotton, grain sorghum, and peanut producers in the Prairie Gateway have a higher share of total operating costs from direct energy costs than do producers in other regions, partly due to irrigation expenses. The higher energy input costs in this region are mainly due to additional fuel costs associated with irrigation. High energy prices could reduce production of these crops in the Prairie Gateway if less acreage is planted or if reduced irrigation lowers yields.

Changes in energy prices may have a greater effect on producers of major field crops in the Southeast—the Southern Seaboard and Eastern Uplands. Fertilizer costs as a share of total operating costs were highest for corn and cotton producers in these regions. Higher energy prices could result in a reduction of these crops in the Southeast if fewer acres are planted or if reduced fertilizer use cuts yields.

Direct energy costs make up a small share of total operating costs on livestock operations, comprising 3-7 percent of the operating costs for hogs, dairy, and cow-calf operations in 2004. However, these operations can experience higher energy costs indirectly through higher feed production costs. Feed costs make up roughly 60 percent of total livestock production costs, so livestock producers could expect to see cost increases through either purchased feed or feed produced onfarm.

Certain production practices provide important means of energy conservation. For example, conservation tillage provides key opportunities for both direct and indirect energy conservation. Reduced tillage involves less fuel consumption when a tractor runs over the field fewer times and saves indirectly by reducing fertilizer requirements. Drip irrigation methods involve lower water-pumping costs and can also use nutrients more effectively. But, additional gains in agricultural energy efficiency could still be captured, especially in the areas of tillage, pest, nutrient, machine, irrigation, and drying management for crops. ERS researchers used the most recent (2001) production practice survey for corn (one of the most widely planted and input-intensive crops) to examine the extent of adoption and use of selected energy-reducing practices:

The above examples indicate areas where energy use can be reduced. However, at the time this information was gathered, the higher energy-using practices may have been economically efficient. The current increases in energy prices may result in changes to such practices.

Increases in petroleum and natural gas costs directly affect rural communities and their residents through higher transportation and home heating costs. A secondary effect of rising fuel costs is to discourage people from vacationing in or moving to rural areas, particularly remote areas far from major services and employment centers, thereby reducing revenues to businesses that provide services to these people.

Rural Households. Because of higher personal transportation expenditures, rural households are more likely than urban households to feel the pinch of increased gas prices. Rural residents depend more on cars and trucks than on public transit, driving 17 percent more miles each year per household than urban residents do. Less than 1 percent of nonmetropolitan (nonmetro) residents use public transportation, compared with 6 percent of metro residents, according to the Census Bureau. In addition, rural drivers are more likely to use SUVs or trucks as personal transportation than are metro residents, another factor raising rural fuel costs.

Estimates based on recent surveys of vehicle use and projected fuel prices suggest that the average rural household with at least one driver will spend about 30 percent more on fuel in 2006 than in 2004, unless driving patterns change. Because urban households drive less and are less likely to drive small trucks, their fuel costs will increase less—$680 compared with $850 for nonmetro drivers.

Rural communities with persistent poverty may be hit hardest by energy cost increases. The poverty threshold for a family of four in 2004 was $19,157. Assuming that their driving level is the rural average, their projected increase in household fuel costs would represent over 4 percent of income. While poor families may not drive as much as other families, workers in persistent-poverty counties tend to travel longer (25 minutes) to their jobs than do workers in other rural counties (21 minutes). Commuting time increased 24 percent between 1990 and 2000, a period of declining poverty in these counties. Adjustments to rising fuel costs in poverty counties are likely to be difficult because residents are already more likely to carpool (17 percent) than are workers in other nonmetro counties (13 percent), and public transport, as in other nonmetro counties, is virtually nonexistent.

Rural communities increasingly depend on tourism, second-home ownership, retiree inmigration, and the ability of people to commute long distances to work from rural places with desirable attributes. Substantial rises in transportation costs are likely to reduce these activities, particularly in rural areas that are relatively remote from major urban centers, and to slow rural growth, possibly leading to job and population losses. Earnings from recreation industries have grown considerably faster than overall earnings in rural areas. Also, recreation counties have generally gained population at a much faster rate than have other types of rural counties. The advantage is especially striking in counties not adjacent to metro areas. In 2000-04, recreation counties were the only type of county to gain population in nonadjacent counties. With high rates of growth, construction jobs are plentiful in these counties. Moreover, these counties attract entrepreneurs and retirees, whose incomes are generated by other types of businesses or investments, as well as tourism. While it is difficult to determine the impact rising energy costs may have on these trends, significantly increasing transportation costs may slow some of these growth patterns.

Tradeoffs May Lie Ahead

Farm and rural households may need to make certain tradeoffs to adjust to higher energy prices. Farmers may need to grow commodities that use less energy. High fuel costs may also induce more farmers to adopt farming practices that use less energy. And because farming is only one source of household income, additional members of the farm household may seek off-farm employment.

Because of higher transportation expenses, rural communities may see changes in settlement patterns, especially in more remote rural areas. Commuting patterns may also change in terms of type of vehicle used and distance people drive to work (some could move closer to their employment, usually near urban centers). With greater use of computers and the Internet in rural areas, more rural workers may seek jobs where they could work from home at least part of the week.

In addition, rising energy prices will likely increase the demand for bioenergy, from which agriculture may benefit and play a key role. However, data are not currently available to support a comprehensive economic analysis of these effects. Some insights are contained in the USDA Agricultural Baseline Projections to 2015, which assumes an increase in corn demand for bioenergy and incorporates energy price forecasts from the Energy Information Administration in production costs for all countries. The USDA baseline embeds an assumption about future corn use for ethanol: “Corn used to produce ethanol in the United States more than doubles the 2004/05 level by 2015/16. This increase reflects the Renewable Fuel Program of the Energy Policy Act of 2005, large ongoing ethanol plant construction, and economic incentives provided by continued high oil prices.”