Will 2005 be the year of the whole grain? According to the new Dietary Guidelines for Americans, it should be. For the first time, the Dietary Guidelines have specific recommendations for whole grain consumption separate from those for refined grains. The Guidelines, released in January 2005, encourage all Americans over 2 years old to eat at least three 1-ounce-equivalent servings of whole grains each day, or roughly half of their recommended 5 to 10 daily servings of grains, depending on calorie needs.

The goal of this new recommendation is to improve Americans’ health by raising awareness of whole grains and their role in nutritious diets. The Guidelines could also, however, have big impacts on farmers and farm production. How big depends on consumers’ and manufacturers’ responses.

Historical eating trends, and the popularity of diets, demonstrate that consumers do modify their food choices in response to diet and health information. For example, in response to health warnings about consuming too much saturated fat, per capita consumption of whole milk declined by 70 percent between 1970 and 2003, while consumption of lower fat and skim milk increased by 140 percent. However, trends in overall fat consumption suggest that some dietary advice is ignored. Total per capita consumption of added fats and oils has risen 63 percent since 1970, despite widespread health warnings.

The new whole-grain recommendations are ambitious, given Americans’ current eating patterns. Though Americans have been eating more grain products, they consume few whole grains. According to ERS food availability data, Americans were eating, on average, 10 servings of grains a day in 2003—only 1 of which was whole grains. Whole-grain data are incomplete, as information on some whole grains, such as buckwheat and quinoa, are not available.

Whether consumers embrace whole grains involves weighing their attributes—taste, convenience, availability, price, and perceived health benefits—relative to other food choices. For most consumers, taste is the deciding factor, as shown by years of survey data from the Food Marketing Institute. Whole-grain products that fail to pass the consumer taste test will have difficulty competing against refined products that do.

Convenience may also be an issue for some consumers. Many whole grains require longer preparation and cooking time than refined grains. For example, brown rice takes 25 minutes longer to cook than white. For some consumers, availability may also hinder whole-grain consumption, though less so now that whole-grain products are increasingly plentiful in places other than health food stores and mail-order companies.

Cost is another consideration. Historically, some whole-grain products were more expensive because they were specialty items produced in smaller quantities. A 2001 ERS study found that the average supermarket price for whole-wheat or whole-grain bread in 1999 was $1.38 per pound, versus $1.15 for nonwhole-grain bread. Brown rice cost $1.16 per pound, versus $0.72 for nonwhole-grain rice. A more recent ERS analysis puts the average cost of whole-grain/whole-wheat bread at $1.99 per pound in 2003, versus $1.66 per pound for white bread. Where they exist, price spreads above industrywide thin profit margins may provide an unexpected benefit to food manufacturers who produce whole-grain products. However, any price spread will likely be short-lived as more manufacturers join the whole-grain market.

For consumers who follow the Guidelines and decide to eat more whole grains, constraints may remain. Even motivated consumers may have difficulty meeting dietary recommendations because it is often tough to tell which products contain whole grains. There is no universally accepted definition of whole-grain foods, and labels may be hard to understand. Labels like “wheat bread,” “stone-ground,” and “seven-grain bread” do not guarantee that the food contains whole grains. Color is not a good indicator of whole grains either because foods may be darker simply because of added molasses (see “What Are Whole-Grain Foods?”). 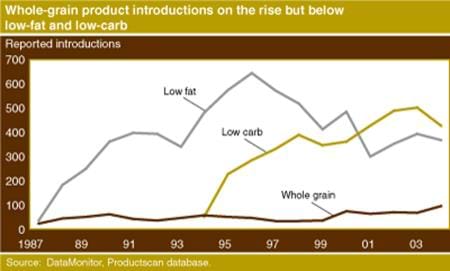 Once consumers identify whole-grain products, they may still struggle with getting recommended amounts of whole grain into their diets. Most consumers are unclear on what a serving of whole grains is, particularly in an era where oversized food portions are common. In general, a serving of grains is an ounce-equivalent of food, such as a slice of bread; a half cup of cooked cereal, rice, or pasta; or about 1 cup of dry cereal (¼ cup for dense, granola cereals to 1½ cups for some unsweetened puffed cereals). Consumers who do not have a good sense of a serving size may have difficulty judging how their daily consumption tallies up against serving recommendations.

In the short run, consumers will probably not meet the goal of three ounce-equivalents of whole grains per day. However, as knowledge of the Guidelines grows and as consumers learn more about the health benefits of whole grains, consumption patterns will likely change. Consumers, however, are only one side of the equation; manufacturers will play their part in supplying whole-grain alternatives.

Food manufacturers can serve as catalysts to change by quickly responding to, or even anticipating, dietary trends. In their business decisions, they incorporate the latest scientific evidence and market research, while closely following food consumption trends. In anticipation of the new Dietary Guidelines and consumers’ reactions to them, many companies launched new branded packaged foods with higher whole-grain content in 2004. For example, General Mills announced plans to switch all its cereal formulations to whole-grain products, Nestlé launched a frozen entrée line made with 100-percent whole grains, and Sara Lee launched its Heart Healthy Plus line of fortified, 100-percent whole-wheat and multigrain breads. That same year, ConAgra introduced a new whole-grain flour called “Ultragrain White Whole Wheat.” ConAgra uses both an extra refining process and a less commonly used wheat (hard-white winter) to make whole-wheat products similar in taste and “mouth feel” to refined products, while retaining the nutritional benefits of whole grains.

Other important food industry sectors are also involved in the whole-grains story. Foodservice operators and retailers are adding more whole-grain items. For example, in January 2005, Noodles & Company introduced a whole-grain fettuccine to the menus in all of its restaurants. In February, the Grain Foods Foundation, a joint venture of the milling and baking industry, launched a $3.5-million Grains for LIFE campaign to educate the public about the benefits of whole-grain and refined-grain foods. While the food industry has been responsive to the potential for increased whole-grain demand, the number of new products is still far below low-fat and low-carb product introductions. This responsiveness will likely accelerate in the face of actual increases in demand for whole grains.

Impact on Grain Producers Depends on Many Factors

The remaining byproducts from refined-flour milling are diverted to secondary uses. Bran, for example, is used as an ingredient in food products and livestock feed. A shift from refined-grain to whole-grain products could reduce the quantity of grain milled and supplies of byproducts for secondary markets.

The net effect on grain producers of a shift to whole-grain products will depend on a myriad of factors, including the type of grain demanded by food processors and the location of the producer. Wheat farmers in the Midwestern, South-Central, and Eastern United States favored by longer growing seasons and more abundant rainfall would find it easier to switch to other crops.

The eventual impact on grain producers will also depend on the interaction of market forces in domestic and foreign markets. In the United States, other commodity markets would interact to lessen adjustments in the grain market due to a shift to whole-grain products. For example, farmers may use a larger share of corn and sorghum instead of wheat byproducts in livestock rations. In international markets, if domestic demand drops for wheat grain, there may be larger U.S. supplies available for export to countries such as Egypt, Japan, and Mexico, three of our largest foreign wheat markets. In the longer term, as companies develop new processing methods and whole-grain products that appeal to consumers, domestic demand for grains will likely increase.

Consumers’ reactions to the new Dietary Guidelines will help determine the mix of grains grown by farmers and the mix of products supplied by manufacturers and served by restaurateurs. Nutrition and farm policy analysts are watching to see how the whole-grains story unfolds. Only then will the Guidelines’ true impacts on Americans’ nutritional health and on U.S. agriculture become clear.

There is no universally accepted definition of whole grains. The new Dietary Guidelines uses the American Association of Cereal Chemists’ definition, which is “foods made from the entire grain seed, usually called the kernel, which consists of the bran, germ, and endosperm. If the kernel has been cracked, crushed, or flaked, it must retain nearly the same relative proportions of bran, germ, and endosperm as the original grain in order to be called whole grain.” The U.S. Food and Drug Administration (FDA) requires foods that bear the whole-grain health claim to: (1) contain 51 percent or more whole-grain ingredients by weight per reference amount and (2) be low in fat.

Whole grains can be consumed either as a single food, such as wild rice and popcorn, or as a food ingredient, as in some multigrain breads. Whole grains are good sources of fiber and other nutrients, such as calcium, magnesium, and potassium. Diets that contain at least three or more ounce-equivalents of whole grains per day may help with weight control and can reduce the risk of several chronic diseases, such as coronary heart disease and some kinds of cancer. Refined grains are the product of a process that removes most of the bran and some of the germ. During this process, some dietary fiber, vitamins, minerals, and other natural plant compounds are lost.

Almost all refined grains are enriched before being further processed into foods, a step taken by many grain companies since the 1940s. In order to conform to FDA’s standards of identity, enriched foods were required to be fortified with thiamine, riboflavin, niacin, and iron. In 1998, the FDA required that folic acid be added to the enrichment mixture. Currently, enrichment is not required for whole-grain foods.

Source: Dietary Guidelines for Americans, jointly issued by USDA and the U.S. Department of Health and Human Services, January 2005.

<a name='box2'></a>If Consumers Follow the <em>Guidelines</em>: A Wheat Case Study

Wheat made up 71 percent of all U.S. grain consumption in 2003. One pound of wheat makes 0.98 pound of whole-wheat flour but only 0.74 pound of refined flour. If manufacturers increased the amount of whole-wheat flour production from 5 percent of flour production (estimated amount in 2003) to the Guidelines recommendation of 50 percent, only 797 billion bushels—versus 912 billion bushels—of wheat will be needed. Unless secondary demand increased to make up some or all of the difference, demand for wheat for domestic flour production would drop by around 13 percent. This would put downward pressure on wheat prices. However, since less than a third of the wheat supply is used for domestic food consumption, the price effect is likely to be limited.

A drop in wheat demand would trigger a change in land allocation. ERS estimates that for each 1-percent increase in domestic production of whole-wheat flours, 50,000 to 70,000 fewer acres of wheat would be harvested (based on the marketing year 2004/05 yield of 43.2 bushels per acre). To put this acreage drop into perspective, there are a projected 58 million acres planted to wheat in 2005, with a projected wheat harvest of 49.3 million acres.

Some farmers will shift wheat acreage to other crops or varieties. More acreage might be planted with hard-white wheat if the demand increases for foods made with it and if the current price premiums of 1 to 3 percent are sufficiently high, or rise, to overcome producers’ hesitation to grow this crop. (Hard-white wheat varieties are more susceptible to pre-harvest rainfall damage than hard-red wheat varieties.) In 2003, plantings of hard-white wheat accounted for 2.3 percent of all wheat grown in major States, largely in the Pacific Northwest and the Plains (e.g., Washington, Kansas, and Colorado). A shift to whole grains could also affect the demand for certain kinds of grains—and the demand for acreage suitable for growing those varieties. Rye flour and oat/barley products, which are mainly whole grain, could become more popular, as could minor grain products such as kasha and bulgur. 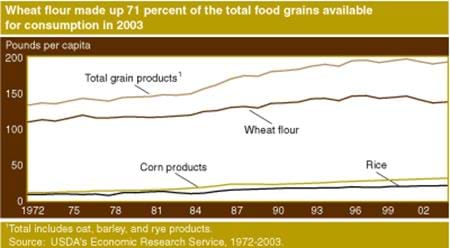