by Shahla Shapouri and John Wainio

Both the United States and the European Union (EU) began providing trade preferences to developing countries in the early 1970s. These trade preferences, which reduce tariffs for designated products from eligible countries, are “nonreciprocal,” meaning that they are granted unilaterally with beneficiaries not required to reciprocate with lower tariffs for donor country exports. The purpose of these programs is to foster economic development, particularly in the poorest countries, through increased trade. Ongoing trade negotiations, however, are creating uncertainty about the future of these programs.

Preferential trade programs have helped developing countries gain access to U.S. and EU markets. In 2002, 102 countries exported agricultural goods to the U.S. and 132 countries to the EU under these programs. The top beneficiaries from U.S. programs were Costa Rica, the Dominican Republic, Colombia, and Guatemala. The top beneficiaries from EU programs were the Ivory Coast, Argentina, China, and India. Both the U.S. and the EU import large quantities of fresh and processed fruits and vegetables, sugar, tobacco and tobacco products, and cut flowers under these programs. The EU also imports large amounts of fish, shellfish, fats, and oils under these preferences. Even with this access, the value of agricultural imports under these programs is a relatively small share of total U.S. and EU agricultural imports, at 6 percent ($3.1 billion) and 18 percent ($11.2 billion) in 2002, respectively. 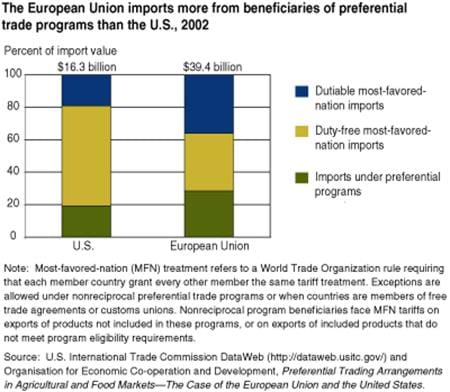 Still, developing countries strongly support these programs and have expressed concern about their future in light of the ongoing Doha negotiations, begun in 2001 under the auspices of the World Trade Organization (WTO). The value of these programs for beneficiary countries is high: in 2003, 50 percent of their total dutiable exports to the U.S. and 44 percent of their dutiable exports to the EU were exported under nonreciprocal preferences.

Much of the negotiations will center on reductions in most-favored-nation (MFN) tariffs. With lower MFN tariffs, the margins of preference—the differences between preferential and MFN tariffs—decrease. Thus, the advantage that beneficiaries now enjoy for products receiving preferential treatment could be lost. However, many products of interest to developing country exporters are currently either excluded from trade preference programs or their access is constrained to limited quota amounts. In these cases, multilateral trade agreements may afford developing countries the opportunity to broaden their export mix to developed countries if they include deep cuts in MFN tariffs for goods that are not eligible for preferential treatment.