by Anne Effland and Carolyn Dimitri

U.S. agriculture underwent a tremendous transformation during the 20th century—the structure of farming and rural life today barely resembles that of the early 1900s. A comparison of six basic agricultural indicators across the century reveals a dramatic transformation of the U.S. agricultural sector. Snapshots of five points in time—1900, as the century opened; 1930, as the Depression began; 1945, as World War II ended; 1970, as the post-war economic expansion began to wane; and 2000/02, on the brink of a new century—serve to highlight key milestones of change in U.S. farming and farm policy during the 20th century.

Integration of farming into the wider economy, 1900–30

New farming technologies and growing demand for consumer goods drew agriculture and farm households into a more integrated relationship with the general economy. Farm household use of purchased farm inputs and household goods, such as cars and radios, often required increased use of credit, and market-determined commodity costs and prices became more critical to farm profitability and farm household well-being. Agricultural producers received high prices through most of this period, due to domestic demand fueled by an increasingly urban population and by export demand spurred by World War I. A sharp drop in export demand following the war triggered a price collapse in 1920-21 that continued through the decade and led to widespread farm bankruptcies and an economic crisis in the agricultural sector. In response, political efforts began in the 1920s to secure government policies to improve access to credit and to support agricultural prices that would enhance farm incomes. 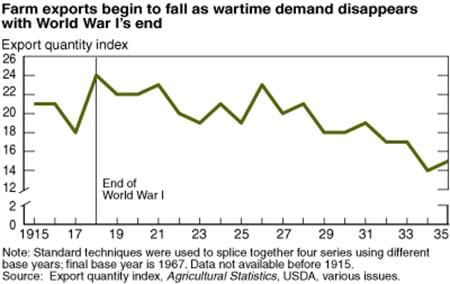 National crises and the foundations of Federal farm policy, 1930–45

Economic distress in the agricultural sector in the 1920s was followed by the Great Depression in the 1930s, leading to unprecedented government intervention (via the New Deal) in the form of emergency programs for both the industrial and the agricultural sectors. The Agricultural Adjustment Act of 1933, effectively the first farm bill, launched the New Deal’s emergency farm programs. The act’s goals were to raise prices for farm products and protect the equity of farmers in debt. Relief and structural adjustment programs addressed the problems of marginal farms and rural poverty. The Soil Conservation and Domestic Allotment Act of 1936 reflected a new interest in soil conservation, simultaneously establishing programs to improve farm incomes and protect soil resources. Renewed demand generated by World War II improved farm prices by 1945, and U.S. agriculture entered a sustained period of productivity gains. 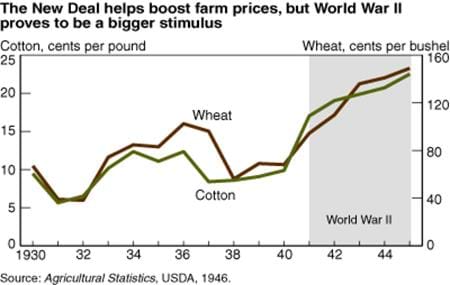 Structural transformation of the farm sector, 1945–70

By 1970, animal power on farms had given way to tractors and other machinery for farm production processes. Advances in productivity through mechanization, plant and animal breeding developments, andnew chemical fertilizers and pesticides led to fewer, larger, more specialized farms and a massive migration out of farming. Farm families increasingly sought income and opportunities from off-farm work, facilitated by a diversifying rural economy. Productivity increases led to commodity surpluses in government warehouses, the result of loan programs that allowed farmers to forfeit commodities in lieu of repayment when prices fell. Commodity policies were adjusted to reduce buildup of surpluses, while new policy approaches, such as food assistance and the soil bank programs, sought to increase demand and reduce supply in ways that simultaneously addressed such concerns as poverty and soil conservation. 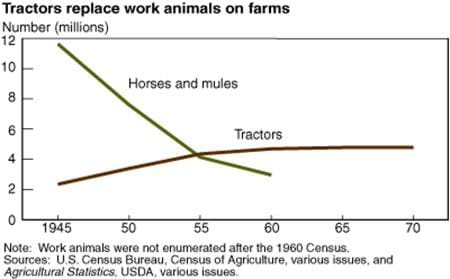 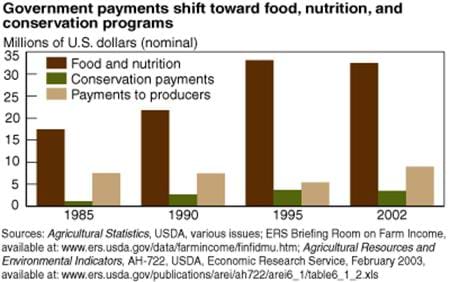