Behind the Data: Population Interaction Zones for Agriculture

by Charles Barnard and Vince Breneman

Widespread conversion of rural lands to urban uses is an issue challenging all levels of government. To provide policymakers with information useful for projecting future changes in land use, ERS has created a system to classify remaining farmland into “population interaction zones for agriculture” (PIZA). These zones represent areas of agricultural land use in which urban-related activities affect the economic and social environment of agriculture. In these zones, population interactions with farm production activities increase farmland value, change farm enterprises, and elevate the probability of conversion to urban-related uses.

Though closely related to the existing ERS county-level Urban Influence Codes and census tract-level Rural-Urban Commuting Area Codes, PIZA is a complementary system that provides codes for much smaller 5-kilometer squares. In addition, the PIZA codes provide a continuous and cardinal (rather than ordinal) measure of population interaction, which is especially useful for some analyses.

Designation of the zones begins with use of common Geographic Information System (GIS) software to assign an index number to each 5-kilometer cell in a grid laid out across the contiguous 48 States. The “population interaction index” (PII) measures the influence that nearby population exerts on agricultural land in each grid cell. Each PII is a continuous measure that accounts for both population size in all grid cells within a 50-mile radius and their distance from the target grid cell. The index increases as population increases, and/or as distance between agricultural land and that population decreases. 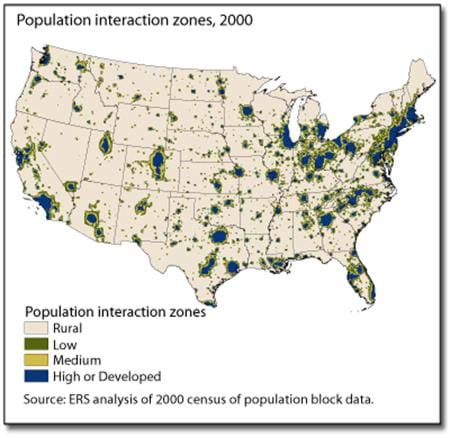