National Organic Certification Cost-Share Program (Title X)—Mandatory funding to assist organic producers and handlers with the cost of organic certification more than doubles from the 2008 Farm Act’s mandate, to $57.5 million over the lifespan of the Act.

Organic data initiatives (Title X)—Total mandatory funding to improve economic data on the organic sector continues at $5 million over the lifespan of the Act; another $5 million is added to upgrade the database and technology systems of USDA’s National Organic Program.

National Organic Program (Title X)—Several new provisions are added to improve the enforcement of USDA’s program that regulates organic standards and certification. Authorized funding for the program expands to $15 million annually. The 2008 Farm Act had increased annual authorization from $5 million in 2008 to $11 million in 2012.

Crop Insurance for Organic Crops (Title XI)—USDA’s Risk Management Agency (RMA) is required to expand organic price elections for producers insuring crops by 2015. Producers choose a percentage of the maximum price set by RMA for their commodity which is used to determine the value of insurance coverage. For many commodities the maximum price election does not reflect the price premium that growers receive for their organic production.

Organic and transition support (Title II)—Conservation practices related to organic production and transition continue to be eligible for payments under an Environmental Quality Incentives Program (EQIP) provision added in the 2008 Farm Act. Payments to organic and transitional farmers under this provision remain capped at a much lower level than those to other farmers. However, farmers can choose the higher payment limit by enrolling in the regular EQIP program. 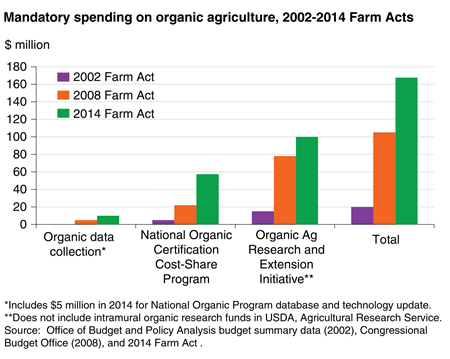