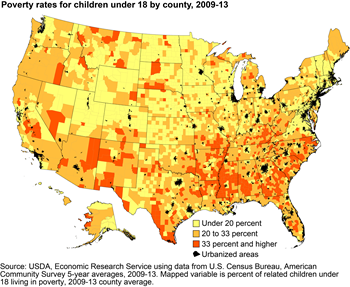 In 1999, one in 5 rural children lived in families that were poor The first factor, the economic conditions of the period, was most marked by the severe recession of 2007-09, but involved highly uneven impacts across rural areas and over time. After booming in the 1990s, rural manufacturing jobs began to disappear at the beginning of the 2000s, a trend that accelerated with the recession. While many local economies dependent on manufacturing had severe setbacks, other rural areas experienced booms in oil and gas mining and never felt the recession.?In general, rural counties with severe recession had much higher average child poverty rates in 2009-13 (31 percent) than they had in 1999 (22 percent). Counties largely immune from the recession, with growth in both employment and earnings, did not, however, have a corresponding decline in child poverty, which remained at 20 percent for the period. These?results are similar to the results for the generally prosperous farm and mining counties in suggesting that economic growth itself was largely unable to reduce child poverty over the past decade.