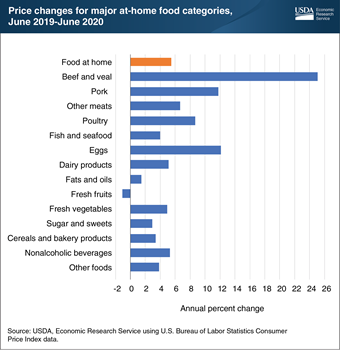 Grocery store prices were 5.6 percent higher in June 2020 compared with June 2019. Retail prices increased for all food-at-home categories except for fresh fruits. Many of these increases were influenced by the coronavirus pandemic. The pandemic disrupted supply chains of several commodities—and affected consumers’ food spending patterns—which put upward pressure on wholesale and retail food prices. The spring 2020 closing of schools and stay-at-home orders resulted in the dairy industry having to shift from supplying products for schools and restaurants to supplying products for grocery stores and other food retailers (food at home). Adapting to this transition placed upward pressure on retail prices for dairy products, which rose by 5.1 percent from June 2019 to June 2020. Beef also experienced supply chain disruptions: decreased slaughter volumes due to COVID-19 led to a bottleneck in supply which boosted prices. Retail beef and veal prices in June 2020 were 25.1 percent higher than in June 2019. Much of this increase occurred after February 2020. Other commodities also saw increases in retail prices. Egg prices increased 12.1 percent since June 2019, and pork and poultry prices increased 11.8 and 8.7 percent, respectively. The data for this chart come from the Economic Research Service’s Food Price Outlook data product, updated July 24, 2020.

This Chart of Note was originally published on Monday, July 27, 2020. 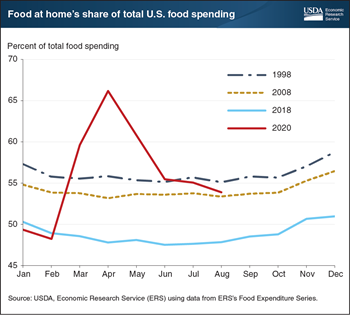