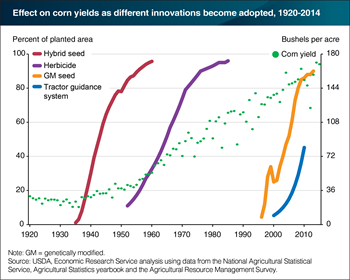 With less labor and land being used in production over time, U.S. agriculture depends on raising the productivity of these resources for growth. Average national corn yield (a productivity measure) rose from around 30 bushels per acre in the 1930s (where it stood since USDA began measuring them in the 1860s) to nearly 180 bushels per acre in the present decade. This sustained growth in productivity was driven by the development and rapid adoption of a series of successive biological, chemical, and mechanical innovations. Every few years farmers adopt the latest hybrid seed variety, for example. These seeds are likely to have multiple genetically modified (GM) traits designed to protect the crop against pests and diseases or infer other valuable qualities—such as resistance to the corn borer, a major insect pest of the crop. Recently, the rapid adoption of tractor guidance systems has greatly improved the speed and efficiency of tillage and planting operations and the precision of seed, fertilizer, and pesticide applications. By 2010, such systems were used on 45 percent of corn planted acres. This chart updates data found in the ERS report, The Seed Industry in U.S. Agriculture: An Exploration of Data and Information on Crop Seed Markets, Regulation, Industry Structure, and Research and Development, released February 2004.