Farm Operators Owned $19.1 Billion in Oil and Gas Rights, Which Generated $3.8 Billion in Payments in 2014

From 2005 to 2014, high energy prices and innovation in extraction methods enabled U.S. production of oil and gas to grow by 69 percent, with almost 67 percent of overall production occurring on farmland. The growth generated tens of billions of dollars of additional revenue for owners of oil and gas rights and increased the value of those rights. In 2014, farm operators owned $19.1 billion in oil and gas rights that generated $3.8 billion in payments through leases with energy firms. 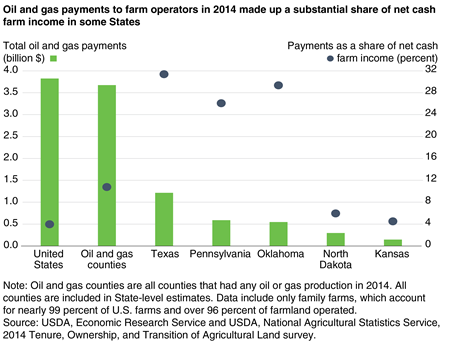