The heightened level of integration between the U.S. and Canadian agricultural sectors is due in part to the Canada-U.S. Free Trade Agreement (CUSTA), which was implemented in 1989 and subsumed by the North American Free Trade Agreement (NAFTA) in 1994. From 1989 to 1998, CUSTA and NAFTA dismantled virtually all tariff and quota barriers to Canada-U.S. agricultural trade, with a few notable exceptions: U.S. imports of dairy products, peanuts, peanut butter, cotton, sugar, and sugar-containing products and Canadian imports of dairy products, poultry, eggs, and margarine. During the CUSTA-NAFTA period, Canada-U.S. agricultural trade has expanded almost without interruption. Between 1988 (the last year prior to CUSTA’s implementation) and 2018, U.S. agricultural exports to Canada expanded at a compound annual rate of 6.3 percent, while agricultural imports from Canada grew at a rate of 7.8 percent. The major exceptions to this pattern of growth occurred in 2009, following the economic downturn of 2007-09, and from 2015 to 2018, due to a decline in many commodity prices. In November 2018, the Canadian, Mexican, and U.S. Governments signed the United States-Mexico-Canada Agreement (USMCA), a new trade accord that would replace NAFTA. As of April 2019, the USMCA had not yet been ratified by the national legislatures of the three signatory countries. 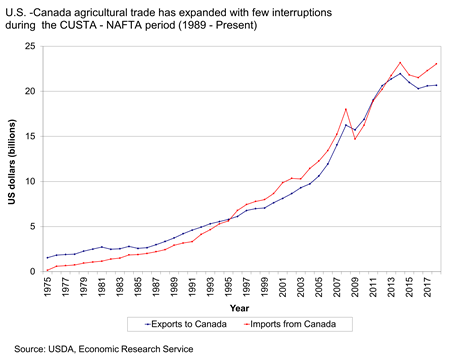 Grains, fruit, vegetables, meat, and related products accounted for about 60 percent of U.S. agricultural exports to Canada in 2018. Among the leading exports were pork ($740 million); beef and veal ($727 million); dog or cat food for retail sale ($650 million); coffee, roasted, not decaffeinated ($405 million); and lettuce ($428 million). 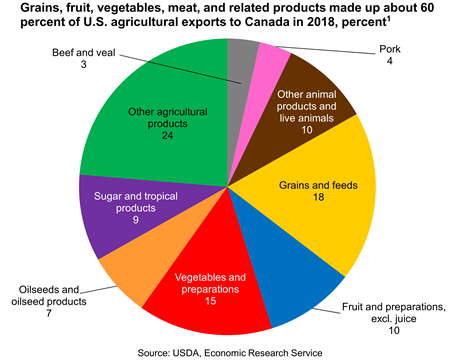 1Data are for calendar year 2018, when U.S. agricultural exports to Canada equaled $20.7 billion. 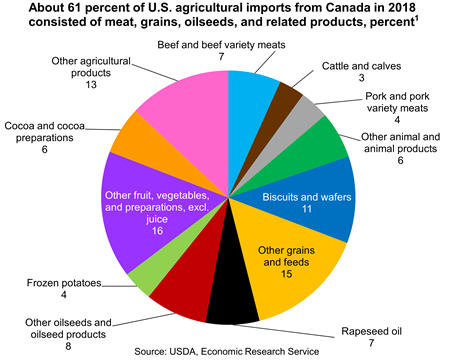 1Data are for calendar year 2018, when U.S. agricultural imports from Canada equaled $23.0 billion.

Foreign direct investment (FDI)—defined by the United Nations as “investment made to acquire a lasting interest in or effective control over an enterprise operating outside of the economy of the investor”—is another type of economic linkage that binds the agricultural, food, and beverage sectors of Canada and the United States. According to FDI data from the U.S. Department of Commerce’s Bureau of Economic Analysis (BEA), Canada was the fifth largest destination for U.S. direct investment abroad at the end of 2018, and the United States’ direct investment position in all sectors of the Canadian economy totaled about $365 billion on a historical cost basis. (BEA defines “direct investment position at historical cost” as a “measure of the value of direct investors’ equity in, and net outstanding loans to, their affiliates in which the direct investors’ investment is valued at book value. It largely reflects prices at the time of the investment rather than prices of the current period and is not ordinarily adjusted to reflect the changes in the current costs or the replacement costs of tangible assets or in stock market valuations of firms.”)

U.S. direct investment in Canada's food and beverage industries is also substantial. At the end of 2016, Canada was the second largest destination for U.S. direct investment in the food and beverage industries. Data for 2016 and 2017 are used for parts of the analysis because some observations are suppressed to avoid disclosing information for a particular company and because industry-specific observations for 2018 had not been released as of June 2019. 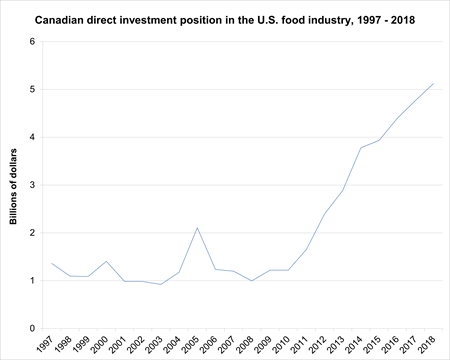 In the food industry, U.S. direct investment experienced substantial growth over the past decade—increasing at a compound annual rate of 14 percent between 2007 and 2017 and rebounding to $11.1 billion in 2017 after successive decreases in 2015 and 2016. Investments in grain and oilseed milling and in fruit and vegetable preserving and specialty foods account for the majority of the increase during the period 2007-17.

In production agriculture, the U.S. direct investment position in Canada was roughly $958 million in 2016 and $1.1 billion in 2017. Of the total U.S. direct investment position in Canada's food, beverage, and agricultural sectors in 2016, the food industry accounted for 42.0 percent, and the beverage industry accounted for 32.4 percent. Two subsectors within the Canadian food industry that are major recipients of U.S. direct investment are: (1) fruit and vegetable preserving and specialty foods (with 36.2 percent of the total for the food, beverage, and agricultural sectors); and (2) grain and oilseed milling (with 14.1 percent). Agricultural production accounted for 5.6 percent of the total. 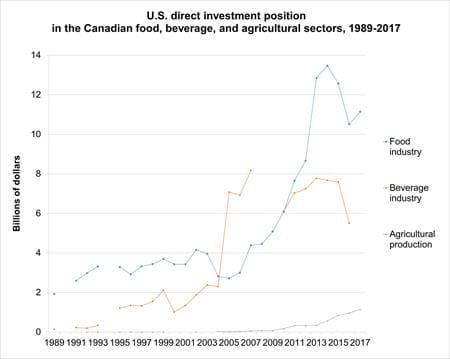