New U.S. food and beverage product introductions in retail outlets, as tracked by Mintel’s Global New Product Database (Mintel GNPD), have followed an upward trend since the late 1990s and a relatively flat trend since 2004. 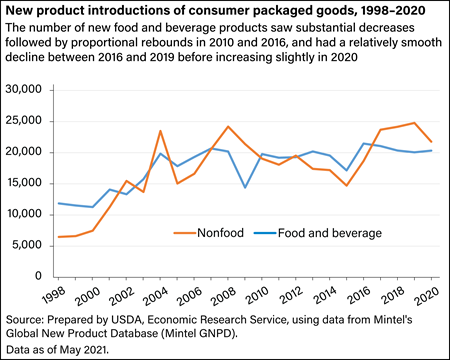 Consumers sought familiar products and avoided impulse buying during the Great Recession. To appeal to bargain-seeking customers who wanted to simplify their shopping trips, as well as purchase familiar products, retailers reduced the number of products introduced; and, in response, some manufacturers reduced their product lines. However, in 2016, the number of new food and beverage products reached their highest level since the last peak in 2007. New food and beverage product introductions had consecutive year-to-year declines in 2014–2015 and 2017–2019, presenting a slight increase in 2020. Nonfood items decreased each year from 2013 through 2015 and increased each year from 2016 through 2019. In 2020, nonfood items decreased by 12 percent.

Advertisements touting products' attributes are displayed on packages and in supporting literature. Based on new product tags or claims (such as "organic") tracked by Mintel GNPD, more than 90 U.S. food and beverage new product claims or tags were identified in 2020. Among the top 10 claim categories, presented in the table below, the top 8 claims have ranked in the top 10 every year since 2015.

Products bearing logos that promote a company’s social media site (for example, Facebook, Instagram, Pinterest, or Twitter) reached the top 10 claims for the first time in 2013. Promoting new products using social media platforms was practically nonexistent before 2012. Products with social media logos increased 13 percent from 2018 to 2019, but decreased 9 percent in 2020 and ranked 8th among all new product claims, accounting for 3.8 percent of new product launches. This increase suggests that more food companies deem networking and promoting their products and business via social media to be an essential component of their overall marketing strategy. Social media platforms are quickly overtaking traditional media formats such as print and TV ads, brochures, flyers, and email campaigns. Advantages to advertising via social media (rather than advertising via traditional media) include lower cost, minimal effort, increased opportunity to interact with customers in real time, global coverage, adaptability, and ability to measure impact. Food companies are now putting QR (Quick Response) codes on products so that consumers can access the company website or online services through their smart phones. Companies may use QR codes to facilitate consumer interaction with products by linking the code to product information, such as the presence of allergens or GMOs.