Broad descriptions of farms based on U.S. averages can mask variation among different sizes and types of farms. A farm classification—or typology—developed by the Economic Research Service (ERS) categorizes farms into more homogeneous groupings for reporting and evaluation purposes. The classification is based largely on annual gross cash farm income of the farm business, the primary occupation of the operator, and ownership of the farm.

Farm size is measured by annual gross cash farm income (GCFI)—a measure of the farm's revenue (before deducting expenses) that includes sales of crops and livestock, payments made under agricultural federal programs, and other farm-related cash income including fees from production contracts.

The farm typology focuses primarily on the "family farm," or any farm where the majority of the business is owned by an operator and individuals related to the operator, including relatives who do not live in the operator's household. USDA defines a farm as any place that produced and sold—or normally would have produced and sold—at least $1,000 of agricultural products during a given year. USDA uses acres of crops and head of livestock to determine if a place with sales less than $1,000 could normally produce and sell at least that amount. For more information, see the ERS report, Updating the ERS Farm Typology (EIB-110, April 2013).

Distribution of U.S. Farms, Value of Prouction, and Farm Assets 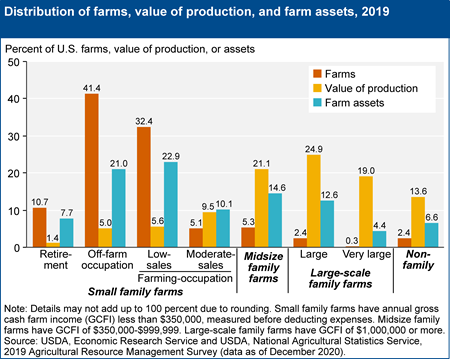