Beginning in 1995, World Trade Organization (WTO) constraints added a new dimension to domestic farm policy. Under the Uruguay Round Agreement on Agriculture (URAA), the United States and other countries agreed to keep the total value of trade-distorting domestic support to farmers from exceeding predetermined ceiling levels and to notify the World Trade Organization (WTO) of annual domestic support spending.

The United States agreed to limit farm-sector support that was considered trade-distorting or “amber box”—as measured by the Aggregate Measurement of Support (AMS)—to $23.1 billion in 1995, declining to $19.1 billion by 2000. The actual U.S. AMS level declined in 1995-97, but by 1999 it had risen to more than 85 percent of the limit. The rise stemmed from an increase in marketing loan benefits and other price-sensitive payments as market prices sagged in 1998-2001. Since then, changes in commodity programs and higher commodity prices have kept support well below WTO limits. 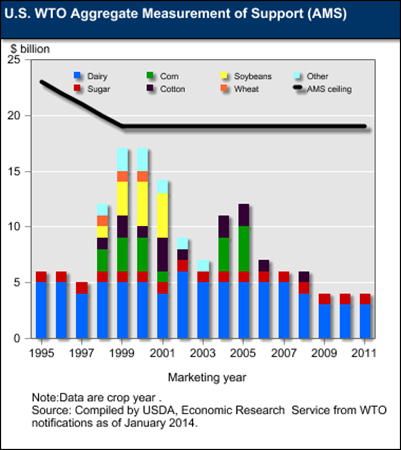 U.S. non-product specific support, which has included emergency market loss assistance (MLA) payments, counter-cyclical program payments, and crop insurance subsidies, has consistently fallen within the de minimis exemption and thus has never been included as part of the U.S. total AMS.  In most years, a share of U.S. product specific support also falls within the de minimis exemption. 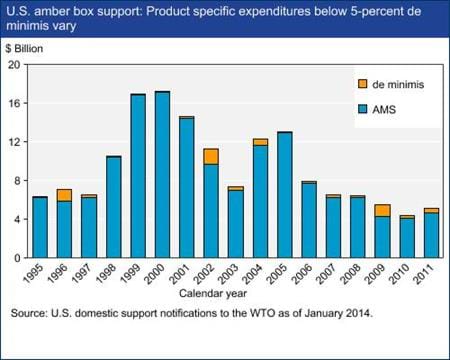 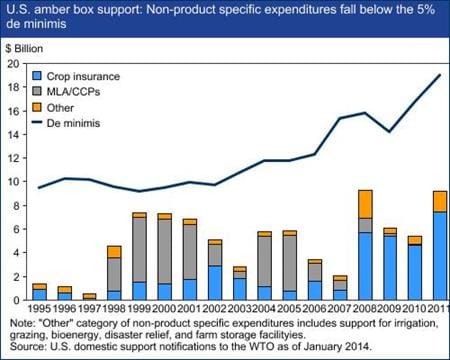 The 2014 Farm Bill continues the WTO "circuit breaker" provision—in place since the 2002 Farm Bill—that gives the Secretary of Agriculture authority to adjust expenditures "to the maximum extent practicable" to avoid exceeding WTO allowable limits for trade-distorting support. The provision has never been invoked.

Under WTO rules, certain programs are considered minimally- or non-trade-distorting and are unlimited. U.S. expenditures in this category (known as the “green box”) increased from $46.1 billion in 1995 to $125.1 billion in 2011 (the most recent U.S. notification to the WTO of domestic agricultural support). The majority of green box payments are for food and nutrition assistance programs. WTO rules permit unlimited use of production-limiting support (known as “blue box” support), but the United States has not made use of any such programs since the elimination of deficiency payments in 1996. 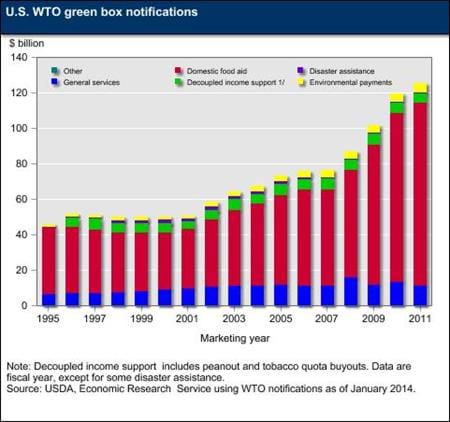 The Organization for Economic Cooperation and Development (OECD)

Perhaps most well-known of these measures, the percentage PSE estimates the share of farm receipts provided through government support in each member country. The U.S. percentage PSE has historically fallen below the OECD average and in recent years has been among the lowest, in large part because high commodity prices have reduced farm program payments to producers. 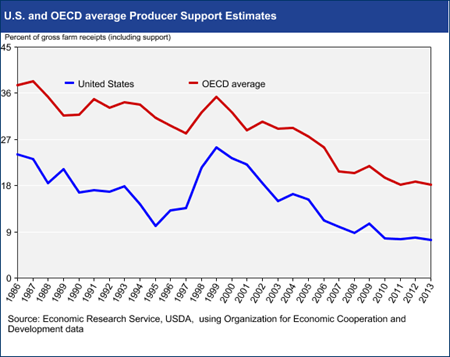 The PSE measure sums transfers to agricultural producers from government (and consumers through higher market prices) through many different types of programs. The share of support provided by these various types of transfers serves as an indicator in the monitoring of policy reform, tracking movement by a country away from policies that are potentially more trade-distorting (transfers based on output and inputs) toward those that likely have more neutral effects on trade. Policy progress by the United States as measured by this indicator has also been positive. 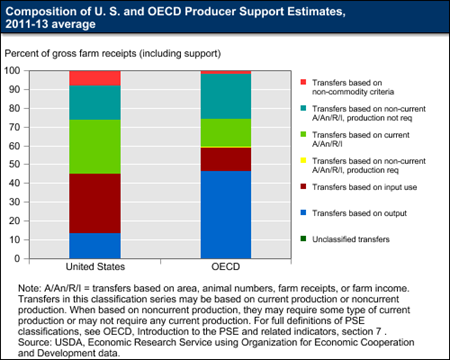 The two other components of the TSE—the CSE and the GSSE—measure transfers to the primary agricultural sector that are not provided directly to individual producers.

The CSE measures the cost to consumers of types of support that increase market prices for primary agricultural products as well as the benefits to consumers of government transfers that support purchase of primary agricultural goods. Polices that increase consumer costs generate a negative CSE, whereas policies that provide consumer supports generate a positive CSE. On balance for most OECD members, consumer costs outweigh consumer supports, producing a negative CSE.

The CSE for the United States has historically been quite different from that of most other OECD members. It has been relatively high and positive, both because of generally lower use of policies that raise prices to consumers and because of the value of consumer support through domestic food assistance. 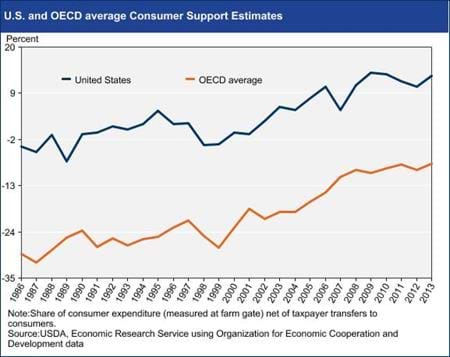 The GSSE measures the expenditures by government on various types of sectoral infrastructure that enhance the productivity of the agricultural sector.

The GSSE for the United States has become an increasingly large share of the TSE as the PSE has declined. While the United States provides support across most of the categories included in the GSSE, the share attributed to marketing and promotion has been historically high because of the inclusion of the share of domestic food assistance spending that can be attributed to the components along the food chain beyond the farm level. Recent changes to the definition and classification of the GSSE will likely reduce this component of the measure for the United States. 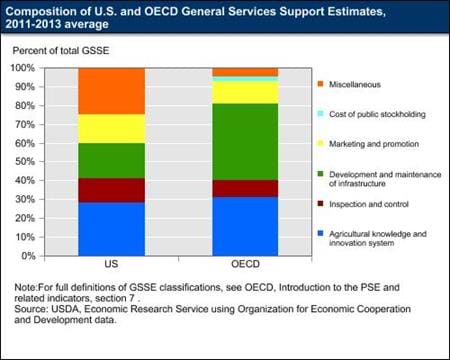 OECD maintains a database of annual PSE/CSE/GSSE estimates on its website, along with documentation of each country’s programs and their classifications within the components of the measure. The database is inclusive back to 1985 in most cases and has been revised periodically to create coherent time series in response to changes in the classification schemes. In addition to OECD member countries, biennial estimates are maintained for selected emerging economies.

Also available at the same link are comparative tables of key indicators across countries, as well as explanations and methodological documentation of the indicators and an online copy of the most recent Agricultural Policy Reform Monitoring and Evaluation Report.