Oil Crops Sector at a Glance

The major U.S. oilseed crops are soybeans, cottonseed, sunflower seed, canola, rapeseed, and peanuts. Soybeans are the dominant oilseed in the United States, accounting for about 90 percent of U.S. oilseed production. Most U.S. soybeans are planted in May and early June and harvested in late September and October (see Usual Planting and Harvesting Dates for U.S. Field Crops for soybean dates by region).

Large-scale production of soybeans did not begin until the 20th century in the United States, but since then area planted to soybeans has expanded rapidly. Increased planting flexibility, yield improvements from narrow-rowed seeding practices, a greater number of 50-50 corn-soybean rotations, and low production costs (partly due to widespread adoption of herbicide-tolerant varieties) favored expansion of soybean acreage. More than 90 million acres of soybeans were planted in 2017, and in 2018 acres planted to soybeans in the United States exceeded corn acres for the first time since 1983. Soybean acres have decreased recently to 76.1 million in 2019.

Acreage tends to be concentrated where soybean yields are highest. (See the Oilseed Crop Yearbook for historical data on soybean and other oil crop acreage, yields, and prices.) Higher yields reduce per-bushel production costs, increasing profitability. Midwestern soybean producers generally have higher yields and lower per-acre cash costs than Southern and Eastern producers. More than 81 percent of U.S. soybean 2020 acreage is concentrated in the upper Midwest, although significant amounts are still planted in the historically important areas of the Delta and Mid-Atlantic. The top soybean producing States in 2020 were Illinois, Iowa, and Minnesota, accounting for 35.2 percent of total U.S. production. 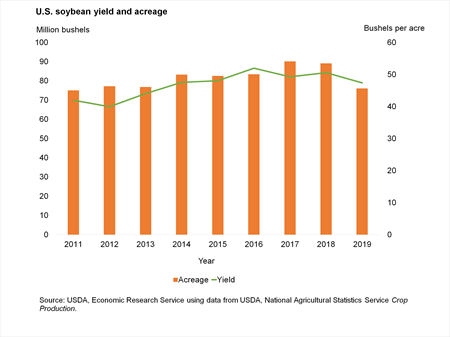 In recent years, an increasing number of soybean farmers have adopted conservation tillage practices. The development of better herbicide applications has allowed producers to use less intensive soil cultivation practices. Soybean pesticide use (nearly all of which are herbicides) ranks second only to corn. Commercial fertilizer was applied to less than 40 percent of soybean acreage, a much lower rate than for most row crops (e.g., corn and cotton). Unlike other crops, soybeans can fix their own nitrogen and require minimal nitrogen fertilizer (see Crop Production Practices from the Agricultural Resource Management Survey).

Soybeans were one of the first bioengineered crops to achieve commercial success. Since 2014 the U.S. Department of Agriculture (USDA) has conducted a farm survey to determine the extent of the adoption of biotech crops (see the annual Acreage report by USDA’s National Agricultural Statistics Service). Biotech soybeans are nearly all herbicide resistant, and 94 percent of U.S. soybean acreage has been reported as herbicide resistant since 2014.The popularity of bioengineered soybeans among U.S. farmers has ramifications for resource use, marketing, and international trade. Herbicide-tolerant soybeans have lowered the cost and changed the type of herbicides used by farmers (see The Economics of Glyphosate Resistance Management in Corn and Soybean Production). Despite potentially higher returns, the adoption of organic field crop production, including soybeans, has been slow and is challenging due to factors such as achieving effective weed control and the processes involved with organic certification. The genetically modified herbicide-tolerant seed used extensively in conventional production is prohibited in organic production.

Oilseeds are covered under Title I—Crop Commodity Programs (see Crop Commodity Programs) of the 2018 Farm Act. The USDA’s Farm Service Agency (FSA) delivers Title I commodity support programs that include the Price Loss Coverage (PLC), the Agriculture Risk Coverage (ARC), and the Nonrecourse Marketing Assistance Loan Program (MAL). Eligibility for commodity program support can include (but is not limited to) meeting adjusted gross income limitations, complying with conservation and wetland protection requirements, and verifying the level of participation in farming activities. Once individuals are eligible, payment limitations cap the total amount they can receive. The 2018 farm bill extended authority for most current commodity programs with some modifications to the ARC, PLC, and MAL programs.

Under the 2018 Farm Act, producers were allowed a one-time choice between ARC and PLC on a commodity-by-commodity basis, with payments made on 85 percent of each commodity’s base acres (i.e., historical program acres that are eligible for ARC and PLC payments). To increase producer flexibility, the 2018 Farm Act provided producers the option in 2019 of switching between ARC and PLC coverage, on a commodity-by-commodity basis, effective for both crop years 2019 and 2020. Producers then have the option to change their program elections (between ARC and PLC) annually, beginning in crop year 2021. Producers also have the option to sign a multiyear contract for the ARC and PLC programs. If no initial choice is made, the producer will not receive any support in 2019, and the program defaults to whichever program was in effect under the 2014 Farm Act.

• Price Loss Coverage (PLC): Producers who hold base acres of oilseeds, peanuts, wheat, feed grains, rice, seed cotton, and pulses (covered commodities) are eligible to enroll in the PLC program on a commodity-by-commodity basis. Under the 2018 Farm Act, payments were made when a commodity’s effective price (the greater of the commodity’s marketing year average price or its Nonrecourse Marketing Assistance Loan rate) falls below the legislatively determined reference prices. The reference prices for oilseeds for 2018 crops are:

The 2018 Farm Act changed the reference price to an “effective reference price” that is allowed to move over time, depending on market conditions. Additionally, the 2018 Farm Act offered producers a one-time opportunity to update their PLC payment yields that took effect beginning with the 2020 crop year. Any year during 2019-22 for which farm-level yield falls below 75 percent of the average county yield is assigned 75 percent of the 2019-22 average county yield.

World oilseed trade consists of many closely substitutable commodities, such as soybeans, rapeseed, sunflower seed, and cottonseed. Countries also trade oils and meals obtained from crushing oilseeds. Soybeans are the fourth leading crop produced globally, by volume. While some of the crop is used directly, more than 85 percent is further processed into soybean meal and oil through crushing. Divergent demand for protein meal and vegetable oil, as well as limits on domestic processing capacity, determine the ratio of oilseeds to oilseed products that countries import. The volume and source of foreign imports depend on seasonal availability and relative prices, credit and delivery terms, local preferences, and quality (see Major Factors Affecting Global Soybean and Products Trade Projections). Combined, soybeans and their derivatives are the most traded agricultural commodity; in 2016/17 they accounted for nearly 20 percent of the total value of global agricultural trade. Global trade of soybeans and soybean products has risen rapidly since the early 1990s and, by 2008/09, surpassed global trade of wheat and total coarse grains. FAS’s monthly report Oilseeds: World Markets and Trade presents forecasts and historical data by country for the major oilseeds and their products, covering production, domestic consumption, and international trade.

The United States is the world's largest producer of soybeans. Oilseed and oilseed product exports, particularly soybeans, represent a significant source of demand for U.S. producers and make a large net contribution to the U.S. agricultural trade balance. Among all U.S. agricultural products, only grains and feeds outrank the oilseed sector in total export value and volume. In the early 2000s, the value of U.S. oilseed and product exports averaged more than $9 billion, nearly half the farm-level value of production. By 2017, the value of soybean exports alone had increased to more than $18.7 billion. Outlook for U.S. Agricultural Trade provides the latest information on U.S. farm exports by commodity and region, as well as the trade outlook. Current U.S. export sales of soybeans, soybean meal, and soybean oil are tracked by destination on a weekly basis. 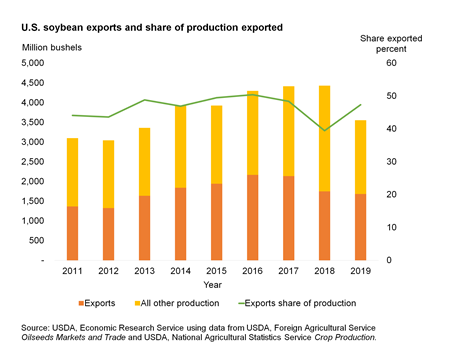 The United States is a relatively small importer of oilseeds and oilseed products. Imports for Fiscal Year 2017 (ending September 30) had risen to $9.3 billion—more than double the level 10 years earlier. These imports are mainly rapeseed and rapeseed products (e.g., canola oil) from Canada, olive oil from Western Europe, and tropical oils from the Philippines, Indonesia, and Malaysia.

The primary factors impacting global soybean and products trade include population and income growth, which are driving the world’s increasing demand for livestock products, as well as policies implemented by major agricultural importers and exporters. Despite substantial growth in oilseed and oilseed product output in the past 25 years and recent gains in export volume, the U.S. share of global exports has steadily diminished. In the mid- to late-1970s, the United States dominated world trade in unprocessed oilseeds, with a global market share of more than 70 percent. Recently, this figure has fallen below 50 percent. In 2017, the United States share of soybean exports fell to 37 percent (see World Supply and Use of Oilseeds and Oilseed Products). This percentage fell to 28.4 percent in 2019 due to decreased soybean trade with China, but the United States is expected to recover some soybean market share in the near future as trade issues with China become less prevalent. From a smaller percentage base, the United States had seen its share of oilseed meal and vegetable oil exports decline even more sharply, particularly before 1990.