See the latest Corn and Other Feedgrains Outlook report.

U.S. corn production is projected to be 14,460 million bushels in 2022/23, a 4.3-percent decline from the 2021/22 estimate. Lower production projections result in tighter projected supplies and reduced use for the year. The season-average farm price for corn in 2022/23 is projected at $6.75 per bushel, compared with the current 2021/22 estimate of $5.90. Other feed grain prices are also projected to be higher year over year, due to strong demand for grains and elevated global commodity market prices.

World coarse grain exports in 2022/23 (October-September international trade year) are forecast to contract sharply, falling 3.7 percent from the estimated exports of 2021/22. This decline is a reversal of the situation observed in 2021/22, when record-high corn and sorghum (as well as near-record-high barley) exports boosted trade in coarse grains to a record-high volume. Lower Ukrainian export projections drive the decline in global trade. However, part of this shortfall is forecast to be offset by higher projected exports by a number of countries. For the world excluding Ukraine, coarse grain exports are actually forecast about 7 million tons higher. A drop in Ukrainian 2022/23 corn exports is expected to curtail China’s imports. Total coarse grain imports by China are projected down 5 million tons to the lowest level in 3 years, despite a still substantial price wedge between the country’s domestic and world prices. U.S. corn exports are projected down 1.5 million tons to of 62 million, still the 4th highest corn exports on record. While lower projected corn output and robust domestic demand are limiting exportable U.S. supplies of corn, a virtual absence of competition from Ukraine is expected to benefit U.S exports. 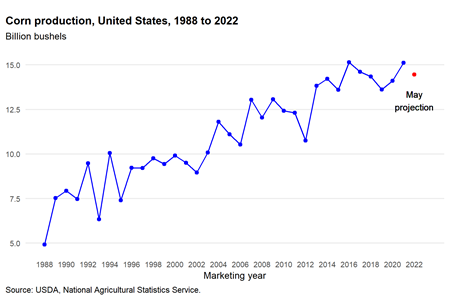