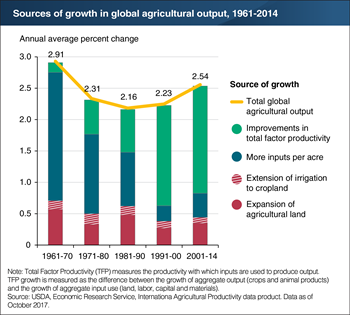 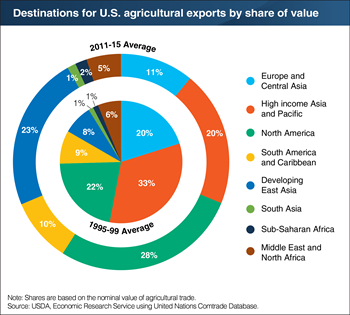 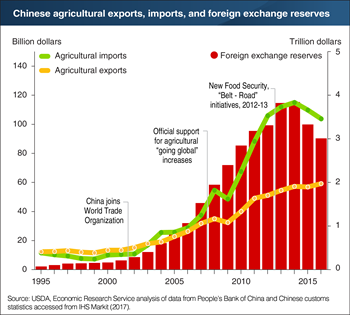 Since China officially joined the World Trade Organization in December, 2001, its role within the global economy has expanded. In addition to its rising role as an agricultural exporter, China’s growing economy has created more demand for food than can be satisfied domestically. As a result, the country has taken a more global approach through trade and foreign investment. China’s outward agricultural investment coincided with several related economic trends, including rapid growth in agricultural imports and foreign exchange reserves. The first prominent official endorsements of “going global” in agriculture appeared during 2007-08, as the value of China’s agricultural imports surged during those years. After a brief dip during the global financial crisis, China’s agricultural import growth accelerated from 2009 to 2013. The growing agricultural trade deficit prompted greater concern among Chinese officials about national food security. China’s foreign exchange reserves also grew rapidly during those years, peaking at $4 trillion in 2014. These reserves provided financial resources to support outward investment. However, foreign investment flows continued to accelerate after foreign exchange reserves and agricultural imports declined during 2014-16. This chart appears in the ERS report, China's Foreign Agriculture Investments, released in April 2018.