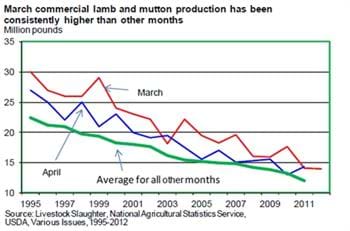 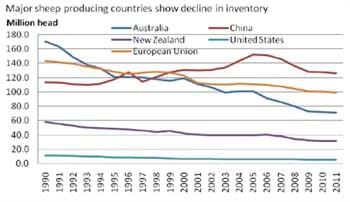 Though global sheep numbers have remained fairly stable since 1960, with inventories remaining close to 1.1 billion throughout the period, sheep numbers in some of the major sheep-consuming and export-oriented producing countries declined steadily. Australia and New Zealand, the largest exporters of lamb and mutton globally, have seen drastic declines, with inventories falling by 17 and 18 percent, respectively, in the last 5 years. The European Union (EU) and the United States-major consumers of high-value lamb-have seen declines in their sheep numbers as well. Much of the decline in these countries' sheep inventories stems from an underlying long-run decline in demand for raw wool and low returns for wool relative to returns from prime lamb production and other farm enterprises. This chart comes from Livestock, Dairy, and Poultry Outlook, LDP-M-207, September 16, 2011.