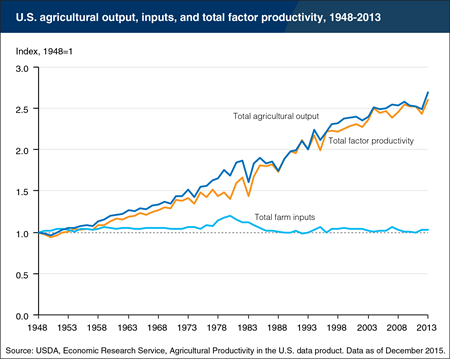 Agricultural total factor productivity (TFP) is the difference between the aggregate total output of crop/livestock commodities and the combined use of land, labor, capital and material inputs employed in farm production. Growth in TFP implies that the adoption of new technology or improved management of farm resources is increasing average productivity or efficiency of input use. From 1948 to 2013, U.S. farm sector output grew by 170 percent with about the same level of farm input use over the period, and thus the positive growth in farm sector production was substantially due to productivity growth. While aggregate input use in agriculture has been relatively stable over time, the composition of agricultural inputs (not shown in this chart) has shifted. Between 1948 and 2013, labor use declined sharply by 78 percent, land use in agriculture dropped by 26 percent, while the use of intermediate goods (such as energy, agricultural chemicals, purchased services, and seed/feed) and capital (farm machinery and buildings) expanded. Long-term agricultural productivity is fueled by innovations in animal/crop genetics, chemicals, equipment, and farm organization that result from public and private research and development. This chart is found in the ERS data product Agricultural Productivity in the U.S., updated December 2015.