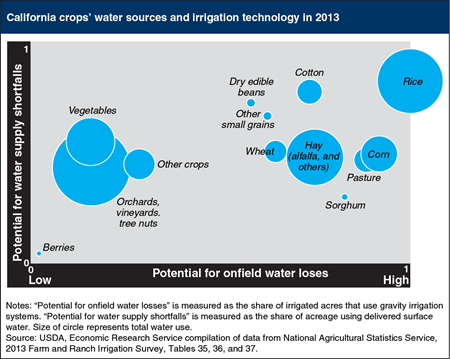 The California drought continues into 2015—as of April, 44 percent of the State is classified under the exceptional drought rating (meaning that there are exceptional and widespread crop/pasture losses; and shortages of water in reservoirs, streams, and wells creating water emergencies, as determined by U.S. Drought Monitor, produced by the interdepartmental U.S. Government National Integrated Drought Information System (NIDIS)). Farmers in California grow a wide variety of crops using off-farm surface water, groundwater, and—to a limited extent—on-farm surface water. Crops such as rice, cotton, and beans that are most dependent on off-farm surface water are the most vulnerable to reductions in snowpack and reservoir storage due to the ongoing drought. In addition, farmers use a variety of irrigation technologies to apply water. Farms that use the least amount of gravity irrigation, such as orchards/vineyards/tree nuts, vegetables, and berries, are the most able to limit evaporation losses during the drought. In many cases, the most capital intensive crops and irrigation systems, such as almond orchards using drip irrigation systems, have been strategically located over the most reliable water supplies, which is why these crops are more likely to continue irrigating during the drought. The crops that represent the predominant sources of agricultural water use—orchards, rice, hay, and vegetables—consume large amounts of water primarily because they are grown on large amounts of acreage. This chart visualizes information found in California Drought: Farm and Food Impacts in the ERS newsroom, updated April 2015.