Effects of Trade on the U.S. Economy

Trade has always been important to U.S. farm and rural economies, from early colonial days when tobacco and cotton were the most important export commodities to today’s diverse range of exports across multiple product categories, with grains, oilseeds, and animal products among the most prominent. Even though farming today accounts for less than 1 percent of U.S. gross domestic product (GDP), U.S. agricultural trade still contributes to U.S. economic activity in sectors other than farming, with impacts felt worldwide. Trade agreements, in tandem with increased productivity and higher incomes, have expanded agricultural trade with developed and developing countries and, in turn, have created growth opportunities for U.S. agriculture. Trade agreements that lower trade barriers to agricultural trade potentially create demand for U.S. agricultural commodities in foreign markets. This demand would be satisfied with purchasing power partly acquired by the ability of foreign nations to increase sales of other products to the U.S. market.

In 2018, the U.S. dollar depreciated by 1.8 percent in real terms—weighted by U.S. agricultural exports—relative to the currencies of its trading partners, making U.S. products somewhat more competitive in foreign markets. At the same time, however, slower growth in world real GDP constrained foreign demand for U.S. agricultural exports. World real GDP growth in 2018 was an estimated 2.93 percent, slightly below the the 3.09 percent expansion achieved in 2017. Economic growth rates in Asia, the Middle East, European Union (EU-28, which includes the United Kingdom, which exited the EU in January 2020), Mexico, and Canada were all lower than in 2017.

The United States trades with numerous countries across the globe, but its agricultural trade is concentrated among a handful of countries. On the export side, 60 percent of U.S. agricultural exports in 2018 were destined for six trade partners: Canada, Mexico, the EU-28, Japan, China, and South Korea. In this ranking, China dropped from second to fifth place between 2017 and 2018, largely due to trade restrictions, including a general effort on the part of China to seek out suppliers other than the United States and the retaliatory tariffs imposed by China on selected U.S. agricultural products. 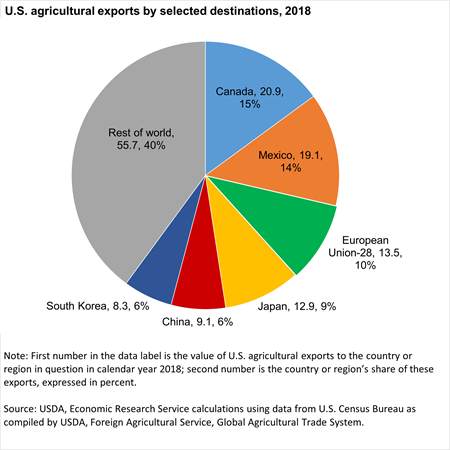 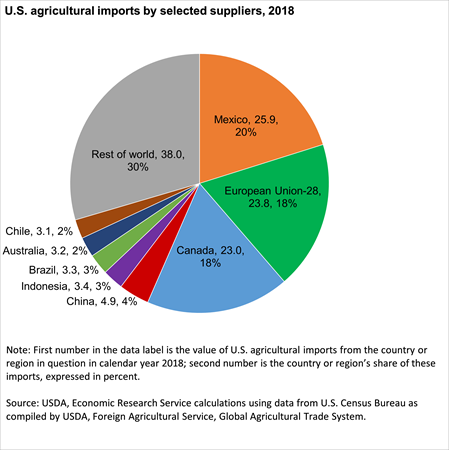 Impacts of Agricultural Trade in 2018

In calendar year 2018, the $139.6 billion of U.S. agricultural exports produced an additional $162.9 billion in economic activity for a total of $302.5 billion of economic output (see table “U.S. economic activity supported by agricultural trade, 2018”). The figure of $139.6 billion in exports is freight on board (f.o.b.), meaning that the total export value includes trade and transport margins added to the production or farm cost in order to bring the product to the export port for shipping. Due to rounding, figures in the text do not always compute exactly to those in table. Agricultural exports also supported 1,048,000 full-time civilian jobs, including 691,000 jobs in the nonfarm sector. Farmers’ purchases of fuel, fertilizer, and other inputs to produce commodities for export spurred economic activity in the manufacturing, trade, and transportation sectors. (For information on how the data are derived, see Documentation.) Because agricultural imports increased more than agricultural exports in 2018, the net contribution of agricultural trade to the U.S. economy—accounting for both exports and imports—decreased from $17.2 billion in 2017 to $10.9 billion in 2018.

The $162.9 billion of supporting or indirect activity generated by agricultural exports in 2018 includes not only activities in the farm sector (i.e., crop and livestock production), food processing, and other manufacturing sectors, but also those activities required to facilitate the movement of exports to their final destination, such as computer and financial services, warehousing and distribution, packaging, and additional processing. The 2018 results underscore the importance of agricultural exports to the services, transportation, and trade sectors, which account for $88.2 billion of the total $162.9 billion in indirect activity. At $22.1 billion in 2018, supporting activity in the farm sector is above the prior year’s level ($21.3 billion). The farm sector’s $68.2 billion of output associated with agricultural exports is the sum of the value of exported raw agricultural products ($46.0 billion, not shown in the table) and the value of supporting activity in the farm sector ($22.1 billion).

The number of jobs required to facilitate total exports of agricultural commodities has been volatile, reflecting short-term price changes, the shifting composition of exports, and longer-term changes in productivity and economic structure. Multipliers estimated for previous years indicate that employment supported by agricultural exports trended upward from 1999 to 2016, with some fluctuations around that trend, and then decreased in 2017 and 2018. Multipliers estimated for years prior to 2013 were based on benchmarks earlier than the 2007 accounts.

In 2018, the employment required to produce, transport, and service agricultural exports totaled an estimated 1,048,000 full-time, civilian jobs. Of these jobs, about 357,000 were farmworkers, and 691,000 jobs in the nonfarm sector were involved in assembling, processing, distributing, and servicing agricultural products for export.

In its Bulk-Intermediate-Consumer Oriented (BICO) classification scheme, USDA divides agricultural trade into three broad categories of products: bulk, intermediate, and consumer-oriented. The last two of these categories make up nonbulk products. The bulk and nonbulk export totals in the multiplier model differ somewhat from the totals in the latest U.S. agricultural trade statistics (as of March 6, 2020), which indicate bulk exports of $46.5 billion and nonbulk exports of $93.1 billion in 2018. For the latest U.S. agricultural trade statistics as well as a complete listing of the products in each BICO category, see USDA’s Global Agricultural Trade Statistics (GATS) database.

For bulk exports, $50.7 billion (or about 67 percent) of the additional business activity took place in the services, trade, and transportation sectors, while only 0.4 percent occurred in food processing. In comparison, the shares of additional business activity generated by nonbulk exports were 9.1 percent in food processing and 42.8 percent in services, trade, and transportation.

In terms of employment growth, sectors outside of farming have been the major beneficiaries of agricultural exports in the past dozen years. Starting around 2004, we observe a divergence between the estimated numbers for farm and nonfarm jobs, with the latter accounting for a rising share of total employment supported by agricultural exports. Although the number of farm jobs then stabilized with a slight upward trend, nonfarm jobs were roughly double the number of farm jobs from 2007-18. This growing importance of nonfarm jobs is consistent with the upward trend in the job numbers supported by nonbulk exports noted earlier. Thus, the composition of agricultural exports (bulk versus nonbulk) influences not only the total number of jobs but also the distribution of employment between farm and nonfarm sectors of the economy.

For the purposes of these multiplier estimates, imports are interpreted as a subtraction from the economic activity that would have occurred in the United States in the absence of those imports. This simplifying assumption is made due to data limitations that prevent us from accurately assessing the impact of imports in the same way that we assess that of exports. Currently, it is not possible to measure the total economic activity associated with imports because no end-use data on imports are available. When imports enter the United States, their value is recorded. After that, they are no longer tracked as imports.

The end use of a product determines its multiplier effects. Imports can be put into inventory (an almost negligible multiplier) or used in a highly processed product (a very large multiplier). Thus, without end-use data, the indirect or supporting impacts of actual agricultural imports cannot be measured in terms of output, employment, or value added, or as a multiplier. Only the value of imports as measured upon entry into the United States can be discerned (direct effects).

Imports can be assigned an economy-wide, domestic business multiplier between 2.00 and 2.50 based on the generally held assumption that the activities associated with “absorbed” imports are the same as those associated with any other domestic commodity. After adjusting for inflation from the benchmark year (2007) to 2018, the average output-weighted domestic business multiplier in 2018 for all U.S. business can be estimated as 2.09.

To illustrate this point, consider that almost all fish products consumed in the United States are imported. If reliable statistics on consumer demand for and the many uses of fish were available, the supporting activity required to deliver imported fish could be measured. But this would be only part of the contribution of fish imports to the economy because fish are also turned into meal and feed, processed products, pet foods, and other uses not related to direct human consumption. These uses become intertwined with domestic production. Finally, to measure outputs from fish imports fully, researchers would also have to separate the movement of imported fish products from the small but growing amount of products from domestic farm-raised fish.

When valuing output associated with imports in the U.S. economy, we calculate a theoretical loss of economic activity from imports equal to the value of the product if it were to be produced here. Some of the leading agricultural products imported by the United States—such as coffee, bananas, and cocoa—are not produced in substantial quantities in the United States. While the purchase of these imports does represent a loss in income to the U.S. economy equivalent to their value at the border, it does not represent a loss in production or supporting activities.

Impacts of Agricultural Imports on

U.S. agricultural imports equaled about $128.7 billion in 2018. If these imports had been produced domestically, the effect on domestic output would have been about $249.7 billion.  As is the case with exports, moving imported products to consumers supports jobs in the data processing, financial, legal, management, administrative, marketing, and transportation sectors. Each dollar spent on agricultural imports in 2018 would have required another $0.94 in supporting goods and services had those imported items been produced domestically. This import multiplier ($0.94) is the ratio of the economic value of the supporting activities assumed to be displaced by imports ($249.7 billion) to the value of agricultural imports ($128.7 billion), minus one.

Because of price changes, increased productivity, and structural and technological advances in the intervening years, the number of jobs per billion dollars of exports declined to approximately 7,500 workers in 2018.

Most high-value and processed products require more total labor than do bulk farm products. This means that in years when nonbulk commodities, composed of high-value products and other types of products that require special handling, are the major share of the export basket, jobs supported by exports are higher. Per billion dollars of exports, nonbulk commodities typically support more jobs than bulk commodities. However, in some years, the opposite is true. The volume (quantity) of exports largely determines overall labor requirements. The farm sector is the single-largest generator of jobs related to agricultural exports. When farm prices are low, customers buy larger amounts of bulk grains and oilseeds. Jobs are supported on the farm and in the supporting transportation and distribution industries, but job growth bypasses the processing and manufacturing sectors. In situations where the prices and value of bulk commodity exports are low and the volume exported is high, bulk commodities may support more jobs per billion dollars of exports than nonbulk commodities. This was the case from 1998-2006 and more recently as well. In 2018, 8,748 workers were needed to deliver $1 billion worth of bulk agricultural exports, versus 6,908 workers for nonbulk exports.

According to prices received indexes calculated by USDA’s National Agricultural Statistics Service (NASS), prices for agricultural production declined by 3.1 percent between 2017 and 2018, after increasing by 3.7 percent the previous year. Livestock prices fell by 5.8 percent in 2018, while crop prices declined by 0.2 percent.

Due to rounding, figures in the text do not always compute exactly to those in table.