Errata: On July 28, 2021, the Agricultural Trade Multiplier Data Product was revised to incorporate corrected multiplier estimates for the ethanol sector and the 2019 Data Overview was updated to reflect these changes.

The Importance of Agricultural Trade

Trade has always been important to U.S. farm and rural economies, from early colonial days when tobacco and cotton were the most important export commodities to today's diverse range of exports across multiple product categories. Grains, oilseeds, and animal products are currently among the most prominent product categories within U.S. agricultural exports. Even though farming accounts for less than 1 percent of U.S. gross domestic product (GDP) today, U.S. agricultural trade still contributes to U.S. economic activity in sectors other than farming, with impacts felt worldwide. In tandem with increased productivity and higher incomes, trade agreements have expanded agricultural trade with both developed and developing countries and, in turn, have created growth opportunities for U.S. agriculture. Trade agreements that lower barriers to agricultural trade potentially create demand for U.S. agricultural commodities in foreign markets. This demand would be satisfied with rising purchasing power in those economies, partly acquired by the ability of foreign nations to increase sales of their products to the U.S. market.

One way in which agricultural trade is essential is that it generates employment—for more than farmers, ranchers, and growers. Many others depend on agricultural trade for their jobs, including the people who process, transport, and market agricultural output and those who manufacture, transport, and market the inputs used in farming. The number of jobs supported by U.S. agricultural exports depends on various factors, such as the quantities of products sold abroad and the quantities of labor required to produce, process, market, and transport those products. In turn, these quantities depend, in part, on the prices of exported products. The quantity supplied of the export and the quantity of labor demanded tend to rise with the product’s price, and the quantity demanded of the export tends to fall when its price rises. Quantities of agricultural products can be measured in terms of mass (metric tons), volume (liters), or numbers (for instance, head of cattle), but ERS's ATM model measures exports and imports in terms of value (dollars). 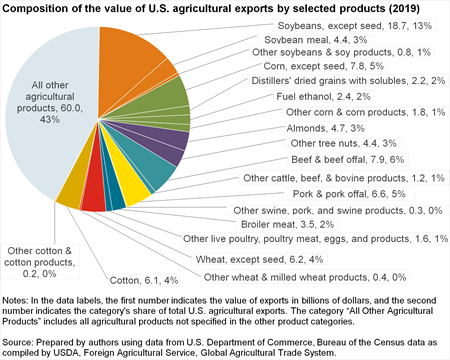 Impacts of Agricultural Trade in 2019

The impacts of agricultural trade on the U.S. economy change from one year to the next. Factors beyond the total value of exports affect ERS estimates of the trade multipliers. Changes in the composition of the agricultural export basket lead to differing direct and indirect impacts on the economy. Productivity growth tends to reduce the size of the trade multipliers—increases in labor productivity imply that the same output can be produced with a smaller workforce or that more output can be produced with the same size workforce. The structure of the U.S. economy also changes over time, influencing the domestic impacts of agricultural exports. Productivity indices and the value and commodity composition of agricultural exports are updated every year when the trade multipliers' annual estimates are being developed. In contrast, information on the changing structure of the U.S. economy is not available on an annual basis; for instance, detailed input-output accounts are published every five years.

With the publication of the 2012 Benchmark Input Output (I/O) accounts by the U.S. Department of Commerce's Bureau of Economic Analysis (BEA) in November 2018, ERS’s ATM model was rebased to incorporate the most recently available set of interrelationships between the various sectors of the U.S. economy. The resulting new ATM model is used for the first time to estimate the trade multipliers for calendar year 2019 and to re-estimate the multipliers for calendar year 2018.

The table “U.S. economic activity supported by agricultural trade, 2018-2019” reports the results of the new ATM model for calendar years 2018 and 2019. Due to rounding, figures in the text do not necessarily match those in the table, and individual numbers in the table do not necessarily sum to the totals shown. The results for 2018 (discussed further below) are obtained using the new ATM model. Consequently, they differ from the results reported for 2018 in February 2020, when the previous ATM model was used (see 2018 Data Overview).

In calendar year 2019, the $141.6 billion of U.S. agricultural exports (line 6) produced an additional $161.4 billion (line 9) in economic activity for a total of $303.0 billion of economic output (line 1). The figure of $141.6 billion in exports is freight on board (f.o.b.), meaning that the total export value includes trade and transport margins added to the production or farm cost to bring the product to the export port for shipping. Agricultural exports in 2019 supported 1,102,000 full-time civilian jobs—495,000 jobs in the farm sector and 607,000 jobs in the nonfarm sector (lines 16-18). In the farm sector, these jobs included labor provided by farm operators, their family members, hired farmworkers, and contract workers. In the nonfarm sector, farmers' purchases of fuel, fertilizer, and other inputs to produce commodities for export spurred economic activity in manufacturing, trade, and transportation. (For information on how the data are derived, see Documentation.)

For the multiplier estimates, imports are interpreted as a subtraction from economic activity that would have occurred in the United States in the absence of those imports. This simplifying assumption is made due to data limitations that prevent us from accurately assessing the impact of imports in the same way that we assess exports. Currently, it is not possible to measure the total economic activity associated with imports because no end-use data on imports are available. When imports enter the United States, their value is recorded. After that, they are no longer tracked.

The end use of a product determines its multiplier effects. Imports can be put into inventory (an almost negligible multiplier) or used in a highly processed product (a very large multiplier). Thus, without end-use data, the indirect or supporting impacts of actual agricultural imports cannot be measured in terms of output, employment, or value added—or as a multiplier. Only the value of imports, as measured upon entry into the United States, can be discerned (direct effects).

To illustrate this point, consider the case of cocoa. Almost all the cocoa consumed in the United States is imported. If reliable statistics on consumer demand for cocoa and its many uses were available, the supporting activity required to deliver imported cocoa could be measured. This would be only part of imported cocoa's contribution to the U.S. economy, however, since cocoa is used as an input for various products (e.g., cocoa powder, cocoa butter, and different types of chocolate). Some of these products serve as intermediate inputs for producing other products; examples include chocolate bars, powdered drink mixes, candy, pastries, medicinal products, skincare products, ointments, and suppositories. To measure the U.S. economic activity supported by cocoa imports fully, one would also need to distinguish the impact of imported cocoa products from domestically produced cocoa products. The data for making this distinction do not exist.

If competitive imports had been produced domestically, the effect on domestic output would have been about $270.8 billion. As is the case with exports, moving imported products to consumers supports jobs in the data processing, financial, legal, management, administrative, marketing, and transportation sectors. Each dollar spent on agricultural imports in 2019 would have required another $1.06 in supporting goods and services had those imported items been produced domestically. This import multiplier (1.06) is the ratio of the economic value of the supporting activities assumed to be displaced by imports ($270.8 billion) to the value of competitive agricultural imports ($131.3 billion), minus one.

The Number of Jobs Supported by U.S. Agricultural Exports Decreased by 5.7 Percent Between 2018 and 2019

The larger decline in approximate mass than in value suggests that the decline in the total value of U.S. agricultural exports in 2019 was due more to a decrease in export quantities than a drop in exported products' prices. Indices calculated by USDA's National Agricultural Statistics Service (NASS) for the prices received by farmers also support this conclusion. Between 2018 and 2019, the annual average of the monthly index of the prices received by farmers for agricultural products remained unchanged at 90.6 (base year of 2011 = 100). The annual average of the monthly price index for crop production decreased from 86.2 to 85.9 (0.3 percent), while the average for livestock production increased from 94.3 to 97.1 (3.0 percent).

At the product level, some U.S. agricultural exports decreased in either volume or value (if not both) in 2019, while others saw increases (see table, "Change in selected U.S. agricultural exports, 2019 versus 2018"). Corn registered a particularly sharp year-to-year decline in both export volume (40.4 percent) and export value (38.6 percent), due in part because the U.S. corn crop in 2018 (exported mainly during calendar year 2019) was smaller than the previous year's crop. Two co-products of corn-based ethanol production—distillers dried grains with solubles (DDGS) and fuel ethanol—also saw large year-to-year declines in exports in 2019. Exports of these three products declined by a total of $5.3 billion between 2018 and 2019.