Trade has always been important to U.S. farm and rural economies, from early colonial days when tobacco and cotton were the most important export commodities, to today’s massive exports of grain, oilseeds, and processed foods. Even though farming today accounts for a relatively small share of U.S. GDP, U.S. agricultural trade is still a significant contributor to the overall U.S. economy, with impacts felt in countries worldwide. As the world’s economies become more integrated, global trade and the links between countries grow ever deeper. Trade agreements have expanded agricultural trade with developed and developing countries and, in turn, have created growth opportunities for U.S. agriculture. By lowering trade barriers, free trade agreements, such as the North America Free Trade Agreement, create demand for U.S. agricultural commodities in foreign markets. This demand is satisfied with purchasing power acquired, in part, by the ability of foreign nations to increase sales of other products to the U.S. market.

Agricultural exports continued their post-2009 upswing in 2011, surpassing the record set in 2010 by $20.6 billion (or 18 percent). Foreign demand for U.S. exports was spurred by economic growth in other regions, such as Latin America and Asia, and by the continued softening of the U.S. dollar.  Agricultural trade was strong even in the face of slowed world GDP growth, estimated at 2.72 percent in 2011, well below the 2010 pace of 3.95 percent. U.S. dollar real exchange rates also depreciated in 2011, when the dollar fell against all major currencies, including those of Japan, China, Canada, Mexico, and the European Union (EU). This made the price of U.S. goods more competitive in those countries. In 2011, Canada surpassed China as an importer of U.S. agricultural goods ($19.04 billion versus $18.86 billion). Together with Mexico and Japan, these nations bought over 50 percent of U.S. agricultural exports.

U.S. imports of agricultural goods in 2011 were the highest ever at $98.9 billion. U.S. imports from Canada totaled $18.9 billion in 2011 (up from $16.3 billion in 2010) and accounted for 19 percent of all 2011 U.S. agricultural imports. Together, Canada, Mexico, and the EU supplied 51.4 percent of all 2011 U.S. agricultural imports. U.S. consumers continued to demand a large variety of imported goods in 2011 and were willing to pay a premium for them. Nevertheless, the United States is a net exporter of agricultural products, with the surplus helping to offset some of the U.S. nonfarm trade deficit of about $942 billion in 2011.

Agricultural trade is most importantly a generator of output, employment, and income in the U.S. economy. For every dollar spent on U.S. exports in 2011, another $1.29 was created in the U.S. economy to support the exporting activity.  ERS Estimates of agricultural trade multipliers show that every $1 billion of U.S. agricultural exports in 2011 required 6,800 American workers, engaged in both direct and indirect supporting activities.

Impacts of Agricultural Trade in 2011

Of the $136.4 billion in direct U.S. agricultural exports in 2011, the value of exported raw products, excluding the supporting activity provided by the farm sector, was $49.6 billion, compared with $54.9 billion of processed commodities and $31.8 billion for transport and trade services. The $176 billion of supporting or indirect activity generated by agricultural exports in 2011 included activities required to facilitate the movement of exports to their final destination (e.g., computer and financial services, warehousing and distribution, packaging, and additional processing). Additionally, the service sector generated $70.2 billion of the total indirect activity. All nonfarm sectors of the economy received about 75 percent of this additional economic activity.

Price changes (which affect the estimates of workers per billion dollars of exports), as well as the export commodity mix, influence the extent to which agricultural exports create employment. Employment required to produce, transport, and service agricultural exports increased from the 2010 level of 907,000 to 923,000 in 2011. 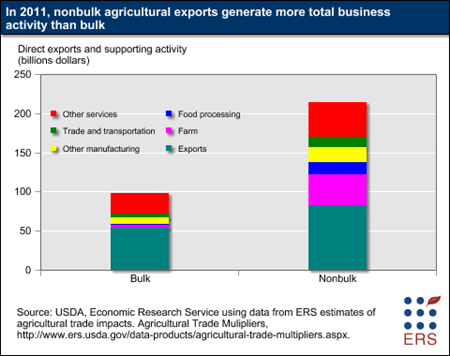 For bulk exports, $25.5 billion (or about 57 percent) of the additional business activity took place in the service sector, while only 0.4 percent occurred in food processing. In contrast, the additional business activity for nonbulk exports was 11.7 percent in food processing and 34 percent in services. Of the 923,000 jobs related to U.S. agricultural exports, 621,000 (67.3 percent) supported nonbulk exports.

Bulk exports (defined as soybeans and other oilseeds, wheat, rice, corn and other feed grains, tobacco, and cotton) have a smaller proportional effect on the nonfarm economy than nonbulk (processed or high-value) exports.

Data limitations prevent us from assessing the impact of imports the same way we assess exports. It is not currently possible to measure the total economic activity associated with imports because there are no end-use data on imports available. When imports enter the United States, their value is recorded. After that, they are no longer tracked as imports but instead enter the general domestic economy to be used in the same fashion as domestically
produced goods.

The end-use of a product is what determines its multiplier effects. Imports can be put into inventory (an almost negligible multiplier) or used in a highly processed product (a very large multiplier). Thus, without end-use data, the indirect or supporting impacts of actual agricultural imports cannot be measured in terms of output, employment, value-added, or as a multiplier. Only the value of imports as measured upon entry into the United States can be discerned (direct effects).

Imports can be assigned the generally held view of an economy-wide domestic business multiplier of between 2.00 and 2.50, because activities associated with “absorbed” imports are the same as those associated with any other domestic commodity. After adjusting for inflation from the benchmark year (2002) to 2011, the average output-weighted domestic business multiplier in 2011 for all U.S. business can be calculated as 2.01.

To illustrate this point, consider that almost all fish products are imported. If reliable statistics on consumers’ demand for, and consumption of, fish were available, the supporting activity required to deliver imported fish could be measured. But this would be only part of the contribution of fish imports to the economy because fish are also turned into meal and feeds, processed products, pet foods, and other uses not related to direct human consumption. These uses become completely intertwined with domestic production. Finally, to fully measure all fish outputs, one would also have to separate the movement of imported fish products from the small but growing amount of products from domestic farm-raised fish.

U.S. imports of agricultural commodities were $98.9 billion in 2011, and if these imported items had been produced domestically, the domestic output effect would have been $216.3 billion. Just as with exports, moving imported products to consumers generates jobs in the data processing, financial, legal, management, administrative, marketing, and transportation sectors. Each dollar spent on agricultural imports in 2011 would have required another $1.19 in supporting goods and services if those imported items had been produced domestically, indicating an output multiplier of 2.19

U.S. agricultural trade had a positive effect on all sectors of the economy in 2011. The farm sector’s $93.3 billion of output associated with agricultural exports more than offset the $44.5 billion of farm output implicitly lost because of agricultural imports. The U.S. economy gained a net $96.0 billion in output (after the theoretical loss to agricultural imports is considered). Outside of farming and food processing, the United States gained $40.2 billion in total output in 2011 from trade in agricultural goods not classified as farm or processed food products (pharmaceuticals and adhesives, for example). U.S. net losses of $3.3 billion from direct agricultural trade (exports minus imports) in these nonfarm, nonprocessed categories was more than offset because the direct plus indirect value of these exports was greater than that of the imports.

In 2011, 6,800 workers were required to deliver a billion dollars’ worth of agricultural exports to their final consumer, a decline from the 7,800 per billion required in 2010.

The volume (quantity) of exports largely determines overall labor requirements. The farm sector is the single largest generator of jobs related to agricultural exports. When farm prices are low, customers buy larger amounts of bulk grains and oilseeds. Jobs are created on the farm and in the supporting transportation and distribution industries, but job growth bypasses the processing and manufacturing sectors. However, in 2011, according to USDA’s National Agricultural Statistics Service, prices received by farmers for major commodities posted substantial increases—between 30 and 35 percent for oilseeds and food grains, 52 percent for feed grains, 24 percent for cotton, and 14 percent for the fruit and nut category. Because some of the increase in agricultural export value in 2011 was driven by increasing prices rather than quantities—and labor productivity continued to grow—there was a decrease in the number of jobs required per billion dollars of exports.

While the jobs per $1 billion of exports declined in 2011, the total employment supporting U.S. agricultural exports increased from 907,000 in 2010 to 923,000 in 2011. In the early 1980s, $35 to $45 billion (in nominal dollars) of exports generated an estimated 1-1.2 million jobs. In 2011, in took over $100 billion of exports to create the 923,000 jobs. ERS estimates for 1983 indicate that $38 billion of agricultural exports created 1.1 million jobs that year, a multiplier of 29,000 jobs per billion dollars of exports (Foreign Agricultural Trade of the United States, 1984). Because of price changes, increased productivity, and structural and technological advances in the intervening years, the number of jobs per billion dollars of exports declined to 6,800 workers in 2011. 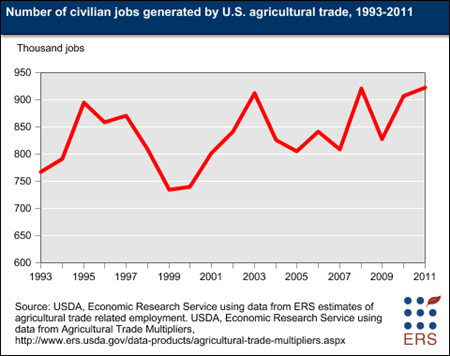