Agricultural Research Funding in the Public and Private Sectors

Data for public and private funding of food and agricultural research and development cover the years 1970-2015 (public) and 1970-2014 (private). Data are available in nominal dollars and in values adjusted for inflation.

Public funding is based on data from two sources:

Private funding estimates are constructed by ERS, based on the methodology presented in the ERS report:

Private agricultural input research is more likely to have impacts on agricultural productivity than private food manufacturing research, so these two components of private research are also available separately in the data.

For more details see Documentation and Definitions and Related Resources. Note that the series methodology and estimates have been revised with this release, see Update and Revision History for details. 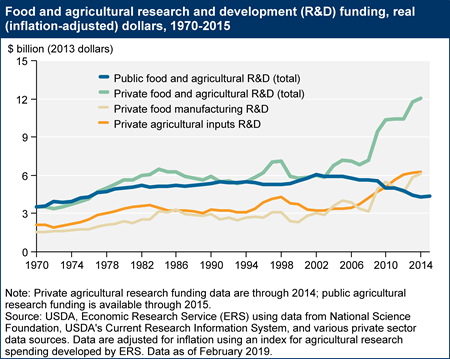