U.S. Exports of Chickpeas, Lentils, and Dry Peas Have Dropped Sharply Due to a Steep Decline in Shipments to India

The United States is a key global producer and exporter of a class of commodities known as pulses (dry edible seeds of plants in the legume family), which includes chickpeas, lentils, and dry peas. In 2017, the United States accounted for about 11 percent of total global exports by volume and ranked third in total shipments. Until recently, U.S. exports of pulse crops increased steadily as the volume of exports rose in concert with prices, expanding planted area, and production. However, for much of the past 2 marketing years (July–June), U.S. exports of chickpeas, lentils, and dry peas were sharply lower due to greatly reduced sales to the key India market. As recently as the first quarter of the 2016/17 marketing year, sales of chickpeas, lentils, and dry peas to India represented nearly 50 percent of all U.S. sales of these pulse crops. In the first quarter of the 2018/19 marketing year, this share had fallen to about 5 percent of aggregate export sales of the same crops.

The recent decline in sales began in the first quarter of 2017/18 when traditionally high seasonal shipments to the India market did not materialize. At that time, abundant monsoon rains helped to greatly expand Indian production of many pulse crops, decreasing demand for U.S. supplies. The large volume of domestic production weighed on prices received by Indian farmers and led the Indian Government to impose tariffs on imported chickpeas, lentils, and a variety of dry peas, further constraining U.S. sales. In the spring of 2018, tariffs on imported pulses from the U.S. were raised once again, this time in response to U.S.-levied tariffs on imports of steel and aluminum from India.

Tariffs of 50 percent for lentils and dry peas and 70 percent for chickpeas remain in place today. These largely constrain the outlook for significant growth in exports to India from the United States. However, there are some recent signs of recovery. In 2019, a weaker-than-average monsoon reduced the outlook for Indian production of lentils and other pulse crops. It also helped to support a sharp increase in lentil shipments to the country in the second quarter of the 2018/19 marketing year, as compared to the same time during the previous year. In India, stocks carried over from the previous year are expected to be sizable and will combine with a smaller—though still significant—volume of new crop production in India.

Demand from India for U.S. pulses is not expected to recover to pre-tariff levels in either the current marketing year or in the next year. Instead, exports are projected to modestly improve, largely based on expected sales growth to a combination of historically smaller markets for U.S. lentils, chickpeas, and dry peas, including Pakistan, Sudan, and China. 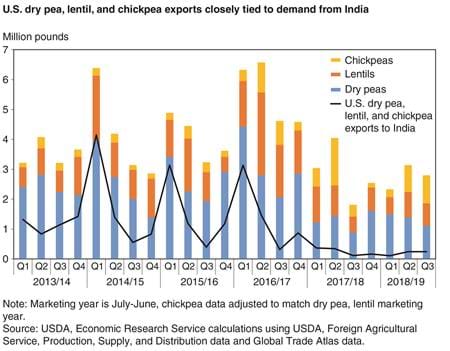 Vegetables and Pulses Outlook: May 2019, by Broderick Parr, Jennifer K. Bond, and Travis Minor, ERS, May 2019