Distance from a person’s home to the nearest food store (supermarket, supercenter, or large grocery store) indicates the ease of access to a major source of a variety of healthful foods. However, this measure does not indicate whether other sources of healthful food are just beyond the nearest store or if that store is the only store for miles. A food store with no close by competitors may not offer the best prices or quality. If a number of food stores are relatively nearby, competition on price, quality, selection of products, and other store attributes is likely to be greater, which could benefit consumers.

In part of their analysis, the researchers used U.S. census tracts to examine the relationship between distances to the nearest and third-nearest stores. (A census tract is a small statistical subdivision of a county that usually contains between 1,200 and 8,000 people.) In many cases, census tracts that were close to one store were close to three stores; likewise, census tracts that were far from one store were far from three stores. The researchers also identified census tracts where the population-weighted center of the tract (i.e., based on where people live within the tract) was within 5 miles of the nearest food store and between 10 to 20 miles from the third-nearest food store. These census tracts were concentrated in the Midwest and portions of the eastern half of the United States. 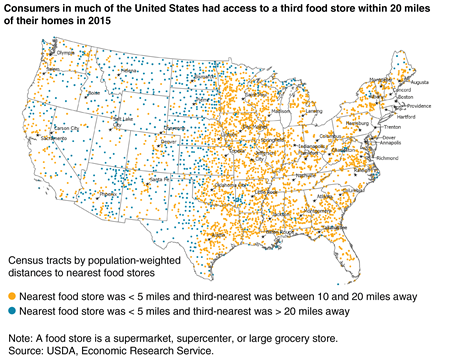