Americans Still Can Meet Fruit and Vegetable Dietary Guidelines for $2.10-$2.60 per Day

by Hayden Stewart and Jeffrey Hyman

Every 5 years, USDA and the U.S. Department of Health and Human Services release a new version of the Dietary Guidelines for Americans with information and recommendations about how individuals can achieve a healthy diet. During 2019, the 2020 Dietary Guidelines Advisory Committee—composed of nutritionists, physicians, and public health researchers—has been meeting to discuss new research and advances, which might be incorporated into the upcoming, next version of the guidelines.

The current 2015–2020 Dietary Guidelines for Americans recommends that people needing 2,000 calories per day include 2 cups of fruit and 2.5 cups of vegetables in their daily diets. USDA food consumption surveys find that the average American falls far short—consuming only 0.9 cups of fruit and 1.4 cups of vegetables per day. Individuals choose foods based on taste, convenience, cost, and other factors, in addition to Federal dietary recommendations. Cost, in particular, has been cited as a possible barrier to higher fruit and vegetable consumption, especially for low-income households.

To inform policymakers, nutritionists, and other researchers about how much money it costs Americans to eat a sufficient quantity and variety of fruits and vegetables, ERS researchers periodically report average costs per cup equivalent for a large set of commonly purchased fresh and processed fruits and vegetables. ERS updated these costs in 2018 using 2016 retail price data.

ERS Calculates Average Cost To Consume Over 150 Fruits and Vegetables

ERS’s 2016 fruit and vegetable cost estimates are based on data from IRI, a market research company. IRI collects scanner sales data from grocery stores, supermarkets, supercenters, and other types of food retailers. ERS researchers use these data to calculate average retail prices per pound (or per pint for juices) for fruits and vegetables across different types of retail outlets, package sizes, brand names, and seasons. Average retail prices are separately calculated for many fruits and vegetables in different forms, such as whole grapes, boxed raisins, and bottled grape juice.

To convert average retail prices into costs per cup equivalent, ERS researchers adjust for inedible parts and any loss that may occur in cooking prior to consumption. For example, fresh potatoes when baked in their skins lose about 19 percent of their weight. For a fresh orange, weight adjustments are made to account for the inedible peel and seeds. 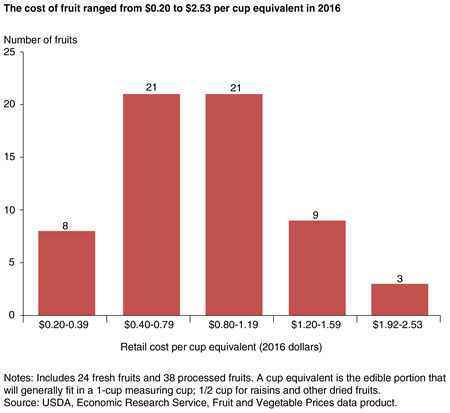 A Consumer’s Costs To Meet Fruit and Vegetable Recommendations

Recommended eating patterns depend on a person’s age, gender, and level of physical activity. Fresh, canned, frozen, dried, and 100-percent juice count equally toward recommended intakes for both fruits and vegetables. However, Americans are encouraged to consume more whole fruit (raw, canned, or frozen) than juice to raise intake of dietary fiber. They are also encouraged to eat a variety of vegetables from each of five subgroups: legumes, dark green vegetables, red and orange vegetables, starchy vegetables, and other vegetables.

Using estimates of each product’s 2016 cost-per-cup equivalent, ERS researchers priced out different combinations of popular fresh and processed fruits and vegetables that would satisfy recommendations for a person on a 2,000-calorie-per-day diet. Each daily combination includes 2 cup equivalents of fruit and 2.5 cup equivalents of vegetables, distributed among different vegetable subgroups, such as dark green, red and orange, and starchy vegetables, as recommended in the Dietary Guidelines. A previous ERS analysis based on 2013 prices revealed that 2 cups of fruit and 2.5 cups of vegetables could be obtained for about $2.10 to $2.60. Retail fruit and vegetable prices rose 2.2 percent from 2013 to 2016, and then a modest 0.4 percent during 2017 and 2018. The analysis using 2016 price data indicated it was still possible to satisfy the Dietary Guidelines’ fruit and vegetable recommendations, based on a 2,000-calorie diet, for about $2.10 to $2.60 per day. 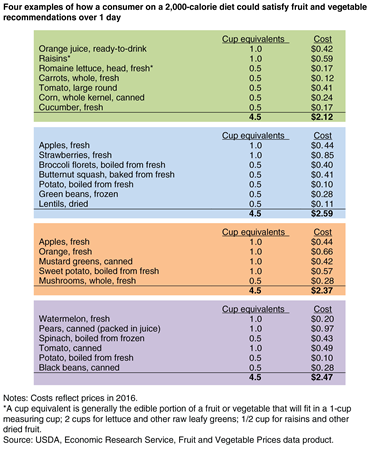