Quantifying the Impact of SNAP Benefits on the U.S. Economy and Jobs

USDA’s Supplemental Nutrition Assistance Program (SNAP) is the Nation’s largest food assistance program. In fiscal year 2018, SNAP served an average 40.3 million people per month and issued $60.9 billion in benefits to be spent in food stores authorized to accept SNAP benefits. The primary goal of SNAP is to provide low-income households with additional resources for buying food.

But SNAP also serves as an automatic stabilizer for the economy. For example, during an economic downturn, when unemployment increases and wages fall, more individuals become eligible for SNAP and enroll in the program. As SNAP participants spend this increased Federal assistance, income is generated for those involved in producing, transporting, and marketing the food and other goods purchased by SNAP recipients. The impact of this increased spending by SNAP households “multiplies” throughout the economy as the businesses supplying the food and other goods—and their employees—have additional funds to make purchases of their own. This multiplier effect on the economy may extend well beyond the initial money provided to SNAP participants.

Although the multiplier theory is well known, the size of the multiplier from increased SNAP benefits is less clear. A recent ERS study examined the multiplier impact of a hypothetical $1 billion increase in SNAP benefits and found that this expansion of benefits during a slowing economy would increase Gross Domestic Product (GDP) by $1.54 billion and support 13,560 jobs, including nearly 500 agricultural jobs (farming, forestry, fishing, and hunting). The expanded benefits would also boost income in the agriculture industries by $32 million.

Higher SNAP Benefits Expand Spending on Food and Other Goods

The size of the multiplier for any kind of government assistance, or spending, depends on how much of the assistance is spent and on what. Previous research concludes that reasonable estimates for the government spending multiplier under general economic conditions range from 0.8 to 1.5, meaning that $1 of additional government spending increases GDP between $.80 and $1.50. Research also suggests that the size of the multiplier depends on economic conditions and the types of spending that take place. Spending multipliers tend to be higher during recessions, when there are underemployed resources in the economy.

Also, empirical research has found that when the government spending targets low-income individuals, such as SNAP recipients, the multipliers tend to be larger. Low-income recipients of government assistance spend most, if not all, of the money they receive soon after receiving it. Higher income individuals, on the other hand, are more likely to save a substantial share of their increased income from the government spending. Although savings spur economic growth through deferred consumption and investment spending, these are less likely than SNAP recipients’ spending to occur in the short term (within a year).

ERS researchers used data from the U.S. Bureau of Labor Statistics to identify and measure the broad types of goods and services that SNAP and non-SNAP households purchase as their incomes increase. While SNAP benefits must be spent on food purchased at grocery stores, supercenters, and other food retailers (food at home), most SNAP participants spend their own cash in addition to SNAP benefits to purchase adequate food. Although SNAP households would spend the full amount of a SNAP benefit increase on food at home, their total food-at-home expenditures would be less than the combined amount of their previous spending plus the new benefit amount. This occurs because SNAP recipients usually redirect some of the cash that they would have spent on food at home to other goods or services.

The researchers used other studies’ estimates and their own analysis to derive a value that best represents how much an additional $1 of SNAP benefits would boost spending on food at home for an average SNAP household during 2016—the period of analysis for the data compiled in their study. This value is referred to as the marginal propensity to consume (MPC) food at home, and they estimated the MPC for food at home from SNAP benefits to be 0.30. This implies that for every dollar of new SNAP benefits, a 30-cent net increase in food-at-home spending would occur, and 70 cents of non-SNAP income would be redirected from food-at-home spending to other goods or services. (Estimates from other recent studies of the food-at-home MPC from SNAP benefits range from 0.16 to 0.65.)

The two categories with the largest increases in spending by SNAP households due to the additional benefits were food (including food-away-from-home spending) and durable goods. Because of their low incomes, SNAP households were, on average, likely to spend all of the new assistance income, rather than direct a part of it to savings.

When non-SNAP households received additional income, the researchers found that, on average, they were likely to spend 63 percent of the new income, and put the rest into savings. The two top categories toward which non-SNAP households would direct an income boost were savings and durable goods. Non-SNAP households’ MPC for food at home is estimated to be 0.02.

When these MPCs are applied to the additional income given to SNAP households through the new SNAP benefits, along with their share of the multiplier effects, the $1 billion in benefits is estimated to increase spending by $28.80 per SNAP recipient, ranging from $9.40 for food to $2.70 for housing and utilities. According to the U.S. Bureau of Labor Statistics, SNAP households accounted for 11 percent of the U.S. population in 2016. Multiplying the per capita spending amounts by SNAP participant population results in a total spending increase of $1.03 billion, with food accounting for $335.7 million of that amount.

ERS researchers compiled a new social accounting matrix to quantify the impact of additional SNAP benefits on GDP, employment, and Gross Domestic Income (GDI) across the farm economy and other industries affected by the increased SNAP assistance (see box, “Defining GDP and GDI”). A social accounting matrix is a fully integrated economic accounting system that summarizes all transactions and income transfers in the U.S. economy among economic agents, such as businesses, government entities, and private households. ERS’s matrix, called the Food Environment Data System, Social Accounting Matrix, uses 2016 data from the U.S. Bureau of Labor Statistics and the U.S. Bureau of Economic Analysis to model how the increased spending by SNAP households and, in turn, non-SNAP households would affect various sectors of the U.S. economy. 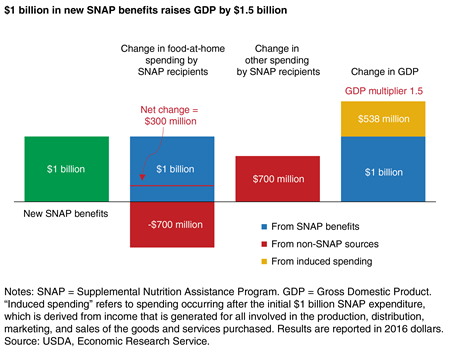 For the trade and transportation industries, new income totaling $406 million and 4,450 jobs would be generated. These industries include grocery stores, food and other wholesalers, plus the trucking and rail freight industries, among others. As previously noted, the two largest grouped items of new spending would be food and durable goods, both of which rely on transportation and trade (wholesaling and retailing) services to market these products. Heath care and social services would see an increase of 2,020 jobs. The hypothetical new $1 billion in SNAP benefits would generate an additional $32 million in GDI going to the agriculture industries (farming, forestry, fishing, and hunting) and 480 full-time equivalent jobs. 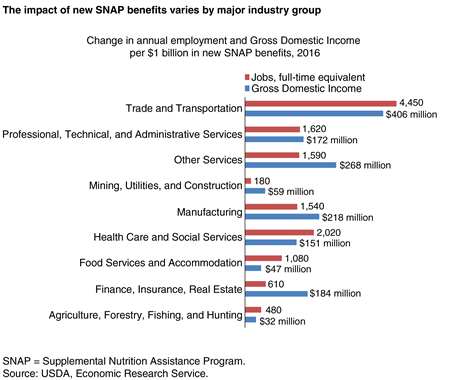 The $32 million in GDI and 480 jobs accruing to the agriculture industries may seem low given the $377 million in additional combined food spending from SNAP and non-SNAP households, but two factors explain this result. First, the foods that consumers buy include inputs beyond the farm ingredients used in the food. For processed foods and beverages, these inputs can include extensive manufacturing steps and elaborate packaging, in addition to the transportation and retailing steps to get them to the consumer. Even unprocessed fresh fruits and vegetables must be shipped, and often packaged, before consumers purchase the produce in grocery stores.

ERS’s Food Dollar data series breaks out the value of the farm and non-farm inputs used to grow, manufacture, and market domestically produced U.S. foods and beverages. In 2016, 18.9 cents of a typical dollar spent on domestically produced foods and beverages in food stores went to U.S. farmers. For foods and beverages purchased in restaurants, schools, and other away-from-home eating places (food away from home), the U.S. farm share was lower—4.0 cents, reflecting the added inputs to prepare and serve away-from-home meals. Non-SNAP households are more likely to direct most of their new food spending from their income boosts to food away from home.

A second reason for agriculture’s relatively low gains from new SNAP benefits stems from the fact that some of the foods and beverages purchased by Americans are imported products, such as Chilean berries and New Zealand lamb. Imported foods and beverages made up almost 13 percent of food and beverage spending by Americans in 2016, according to ERS’s Food Dollar statistics. Purchases of imported foods do not boost U.S. growers’ incomes or agriculture jobs.

New SNAP benefits would likely advantage farmers more than would other fiscal stimulus policies directed towards low-income households, such as tax cuts or cash assistance payments. Previous studies estimated that a low-income household receiving $1 in cash assistance would increase its spending on food by 5 to 10 cents—in contrast to the 30-cent increase that is estimated to result from an additional $1 of SNAP benefits, which is targeted towards food at home. Mental accounting may play a role in these MPC for food-at-home disparities. According to mental accounting theory, households treat different income sources differently. With targeted assistance, such as SNAP benefits, households are likely to shift less of their own funds from food to other goods or services than they would do with cash assistance.

Spending Effects Would Be Smaller Under More Robust Economic Conditions

These findings about the multiplier impacts from additional SNAP assistance are derived from a model that is most appropriate to conditions during a slowing economy when unemployment is relatively high and interest rates on new business loans are relatively low. The model assumes that the additional spending—and the subsequent increased industry output—does not put pressure on the supply of labor and cause wages and loan interest rates to rise.

The multiplier impacts are likely to be smaller when the economy is at or near full employment because labor costs could potentially rise faster than production, which would raise consumer prices and reduce consumers’ purchases relative to what they would have been had consumer prices not changed. Because SNAP participation and the benefit amounts received largely depend on a household’s income, new and higher SNAP spending by the Federal Government is most likely to occur during economic downturns when employment and incomes fall and there are underemployed resources in the economy.

Annual Gross Domestic Product (GDP) measures the value of all personal and government consumption expenditures, plus the value of all private, business, and government investment—plus the value of net export sales (exports minus imports)—over the entire calendar year. Gross Domestic Income (GDI) measures the same value as GDP, but does so in terms of the incomes accumulated from the sales reported in the measure of GDP. These incomes can be added up by the type of industries that sell their goods and services, or they can be added up by the categories of persons or institutions who can claim these incomes from industry—for example, hired labor, stockholders, business owners, and domestic and foreign governments.

Changes in Food-At-Home Spending by SNAP Participants After the Stimulus Act of 2009, by Charlotte Tuttle, USDA, Economic Research Service, December 2016