by Mariana Matias and Mark Ash

ERS forecasts soybean stocks, or unused soybeans held in storage, to reach a high point of 1.05 billion bushels in the 2018/19 marketing year (September–August), driven by reduced exports and record domestic production. High stocks for agricultural commodities are often coupled with falling prices and indicate that demand is not keeping up with supply. These factors can lead to reduced producer revenues and can lead farmers to alter future crop-planting decisions or to seek new markets (domestic or international) to satisfy excess supply brought about by stocks carrying over from year to year.

The forecast for U.S. soybean stocks in 2018/19—up 140 percent from a year earlier—is due to a combination of record domestic production and a sharp decline in exports. The drop in exports is caused largely by a steep decline in exports to China, driven by the imposition of import tariffs on U.S.-sourced soybeans by the Chinese government. Record domestic production was influenced by record yields per acre, leading to more soybeans produced despite less acreage planted than a year earlier. Prices have fallen throughout the year and are expected to fall further to an average of $8.40 per bushel in 2019/20 from $8.50 per bushel in 2018/19.

Soybean stocks for 2019/20 are forecast to decline 24 percent from the 2018/19 record forecast, to 795 million bushels. Stocks had more than doubled from 2017/18 to 2018/19. The United States is forecast to produce 3.85 billion bushels in 2019/20, down from 4.5 billion bushels in 2018/19. Even with this production decline (due to lower expected acreage planted), total soybean supplies—the sum of beginning stocks, imports, and domestic production—would still be only slightly lower than the 2018/19 record high by 84 million bushels due to the unprecedented level of beginning soybean stocks.

Both of the major components of soybean demand, domestic crushing and exports, are expected to increase in 2019/20. Soybeans used for crushing—to produce soybean oil and meal—are forecast to total 2.115 billion bushels, up from the 2018/19 forecast due to a slight increase for domestic soybean meal use. On the 2019/20 export side, replete supplies, a drop in prices, and reduced competition from Brazil are expected to increase U.S. soybean exports to 1.875 billion bushels. This is up 175 million from the forecast for 2018/19--after falling sharply by 434 million bushels--from a record high in 2017/18. While total demand for U.S. soybeans (domestic utilization, and exports) is forecasted to increase, the record level of stocks carried over from 2018/19 means only a small reduction in stocks is expected. 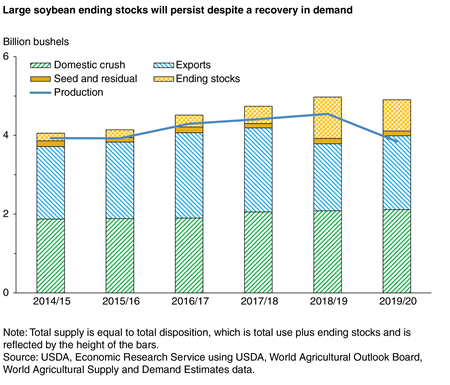