by Stephen Martinez and David Levin

The 2015-2020 Dietary Guidelines for Americans identifies fiber as one of the key nutrients that are currently under-consumed by many people. However, increasing fiber consumption requires not only that manufacturers offer fiber-rich foods to consumers, but also that consumers be able to identify these foods, highlighting the importance of labeling and marketing. Recent ERS analysis demonstrated that the average fiber content in yogurt products increased by over 20 percent between 2008 and 2012, while the improvement in average fiber content in cereal products was more moderate, increasing by nearly 7 percent. Additionally, the analysis observed that new products carrying a fiber claim contained higher levels of fiber than new products without such a claim.

Traditional plain yogurt does not contain fiber, which suggests that the fiber was added by yogurt companies. The higher fiber content of new yogurt products can be partially attributed to fiber added to promote the growth of probiotics—bacteria that promote healthy digestion. Seventeen percent of yogurt products introduced over 2009-12 carried a probiotic health claim (e.g., “probiotics to help maintain digestive health”) compared to 10 percent of exiting products that were dropped from grocery store shelves. New yogurt products with a probiotic health claim on the package contained twice as much fiber on average than new products without the claim (1.25 versus 0.63 grams per serving). 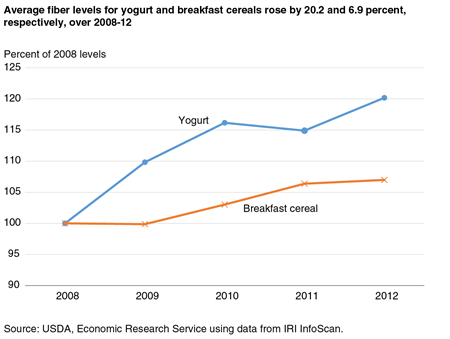 An Assessment of Product Turnover in the U.S. Food Industry and Effects on Nutrient Content , by Stephen Martinez and David Levin, ERS, November 2017