Access to readily available capital can help rural small businesses succeed. A majority of rural businesses are small- and medium-sized firms. However, compared to large firms, these firms often have difficulty accessing capital from the formal financial market. Banks may be hesitant to lend because smaller loans may be less profitable and may have higher default rates.

The Community Reinvestment Act (CRA), enacted in 1977, encourages financial institutions to help meet the credit needs of low-income residents and smaller firms. For small nonfarm businesses, the maximum CRA loan amount is $1 million; for small farm businesses, the maximum is $500,000. However, according to the data reported by the Federal Financial Institutions Examination Council (FFIEC), most loans issued are small (less than $100,000). The FFIEC groups loans into three sizes: $100,000 or less, $100,001 to $250,000, and over $250,000 up to the respective maximum for each loan type.

Since the goal of CRA is to help meet the credit needs of small businesses, a recent study examined county data to assess the impact of CRA lending practices on small business outcomes. The study found that, between 1996 and 2010, receiving higher CRA loan amounts had a statistically significant positive effect on small business startups in both rural and urban counties. Small CRA loans (those under $100,000) had the largest impact in rural areas. With other factors constant, doubling the number of the small CRA loans increased the startup growth in rural counties by 26 percent—compared to just 7 percent in urban counties. 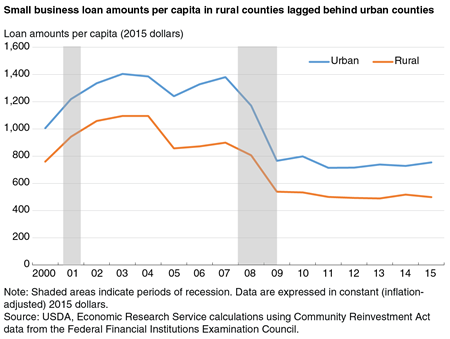