Despite Slow Growth From 2005 to 2015, Independent Grocery Stores Remain Important for Rural Communities

Independent grocery stores play an important role in U.S. food retailing. Past studies found that these stores can be attuned to the needs of the community and offer lower prices for certain products or specialize in ethnic foods in high demand by local residents. Other studies indicate their role in providing employment opportunities and tax revenues and in helping to ensure access to grocery foods in low-income and rural areas where chain grocery stores tend not to locate. A recent ERS study used Nielsen’s TDLinx data to examine the number of independent grocery stores—those whose owners operate fewer than four stores—and their sales in 2015, and how the number of stores has changed over the last decade. The study found that independent grocery stores continue to outnumber chain grocery stores in remote rural counties and locate at higher rates in counties with a large share of Black and Hispanic residents.

Independent grocery stores were also important for counties with a high share of Blacks and Hispanics. On average, in 2015, the percentage of independent stores was 1.54 percent higher in a county with an additional percentage point of Black residents, but only 0.44 percent higher for chain stores. Similarly, for each additional percentage point of Hispanic residents, there were 1.13 percent more independent stores and 0.41 percent more chain stores. 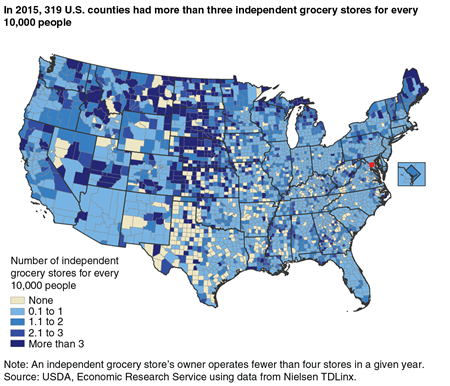