Consumer demand for poultry meat more than doubled in the past 20 years in South Africa, reflecting rising income and population growth. Domestic poultry output grew slower, resulting in a rapid rise in imports. Until 2001, the United States was the largest supplier of leg quarters to the South African market. But in 2001, South Africa imposed anti-dumping duties on U.S. chicken leg quarters, after which U.S. exports dropped nearly to zero.

In 2015, under pressure from the U.S. poultry industry, Congress threatened to exclude South Africa from the upcoming renewal of the African Growth and Opportunity Act (AGOA), unless the country provided greater market access to U.S. poultry. South Africa had a strong interest in the renewal of AGOA and agreed in June 2015 to allow a quota of 65,000 tons of U.S. chicken legs at the most favored nation tariff rate of 37 percent, with exports over that quota still subject to the anti-dumping duty. The first U.S. chicken entered the South African market in March 2016.

Total U.S. exports of leg quarters to South Africa during calendar year 2016 reached 21,291 metric tons, taking 11 percent of the market. The U.S. share came at the expense of Brazil and Argentina, both of which saw a drop in their exports to South Africa. The largest supplier was the European Union (EU), which maintained its 74 percent in South African imports of chicken-leg quarters.

ERS researchers used the 2015/16 USDA Baseline model to analyze the long-term impacts of this tariff change on U.S. and South African markets. Findings suggest that even without a quota, U.S. poultry exports to South Africa would rise only slightly above the 65,000 ton quota, capturing just a third of the South African market. The key reason is that a trade agreement between South Africa and the EU, which took effect in 2012, provides duty-free access to EU chicken. Following that agreement, the EU became the dominant supplier of bone-in chicken, supplying nearly 70 percent of the market in 2012. Model results suggest that the EU market share would fall as a result of the lower duty on U.S. chicken, but its share would remain over 50 percent. Under a second scenario in which EU chicken also faces a 37 percent tariff, ERS researchers found that the U.S. share would rise to 63 percent.

Under both scenarios, the tariff changes lead to very small modifications in the South African poultry industry. In the first scenario, South African production falls slightly, but it rises by a small amount under the second scenario. While the South African poultry industry continues to pressure its Government to restrict imports, it faces a number of internal constraints to expansion, including high feed costs resulting from the need to import soymeal and highly volatile domestic corn production. The industry faces especially severe pressures this year, as a severe drought has reduced the corn crop by 40 percent, raising feed prices still further. 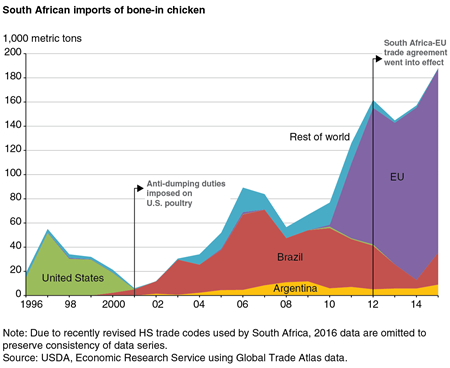