The 2014 Farm Act implemented a change in U.S. dairy policy by establishing the Margin Protection Program for Dairy Producers (MPP-Dairy).  Through the program, dairy producers can protect an estimated margin (milk price minus feed costs) between $4 and $8 per hundredweight (100 pounds) of milk based on national prices for milk, corn, soybean meal, and alfalfa hay. Producers also choose to cover between 25 percent and 90 percent of their production history (highest level of annual milk marketings for 2011-13).  Producers receive program payments when the MPP-Dairy margin is below the selected coverage level for a 2-month period.  Since 2002, the MPP-Dairy margin level has fallen below $8 numerous times but has only fallen below $4 on two occasions (2009 and 2012).

Researchers at the University of Kentucky and ERS evaluated the impacts of MPP-Dairy on dairy producers across 13 regions by comparing actual margins and risk levels during 2002-13 with what producers would have experienced had the program been in existence over the same period. Based on model results, small dairies (4 million pounds of production history) would have seen average margins increase through enrollment in the program as indemnity payments exceeded premiums at all coverage levels.  At the maximum coverage level of 90 percent and the $8 margin level, average margins for these dairies would increase by $0.35 per hundredweight of milk, or less than 5 percent. This would have been the optimal selection for small dairies. Premiums for participation in MPP-Dairy are structured such that they increase on covered milk exceeding 4 million pounds.  For this reason, results were different for medium (20 million pounds) and large (40 million pounds) dairies, with these dairies maximizing their margins had they chosen an intermediate level of coverage ($6 margin) on 90 percent of their production history. As for risk reduction potential, results show that, at the 90-percent coverage level and $8 margin level, downside margin risk reductions ranged from 46 percent in New England to 75 percent in the Northwest. 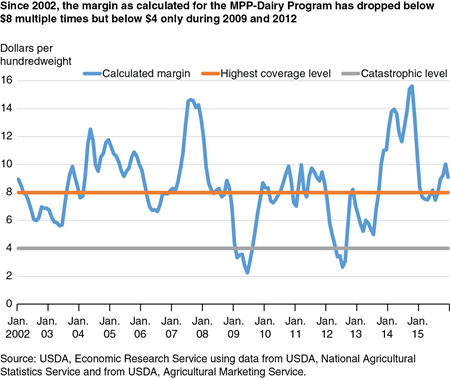