Most consumers underestimate the amount of calories in restaurant meals, especially high-calorie menu items. For example, a 2009 research synthesis by the Robert Wood Johnson Foundation reported that, in a study involving 193 adults, 90 percent of them underestimated the number of calories in entrees containing 930-1,660 calories by an average of 642 calories. In a 2014 study, ERS researchers found that dietary rules of thumb help consumers differentiate low-calorie from high-calorie menu items but are less effective for differentiating between items that differ modestly in calorie content. Systematic underestimation of the calorie contents of restaurant offerings by consumers may be one of the contributors to Americans’ expanding waistlines.

Policymakers in New York wanted to see if providing point-of-purchase calorie information on restaurant menus would effect changes that could lead to reduced body weight. For example, consumers may use the information to substitute away from high-calorie meals while dining out, and restaurants may respond to the regulation by reformulating or resizing their offerings to reduce their calorie contents.

Starting in 2008, New York City mandated chain restaurants with 15 or more locations nationwide to post calorie counts on menus in a font and format similar to that of item prices. Several other local jurisdictions in New York implemented similar laws in 2009 and 2010. An ERS researcher exploited variation in the availability of calorie information on chain restaurant menus across and within New York counties over time—brought on by the staggered rollout of local mandatory calorie-labeling laws—to provide estimates of the impact of calorie labeling on body mass index (BMI, a measure of weight adjusted for height).

The study used data from the 2004-2012 Behavioral Risk Factor Surveillance System, which is a system of State-based surveys coordinated by the U.S. Centers for Disease Control and Prevention that collects information on U.S. residents regarding their health-related behaviors and health conditions, including their height and weight.

To estimate the effect of calorie labeling on BMI, the study employed a model that controlled for other county and State policy changes that could have affected BMI over the study period, individual-level demographic characteristics, county-level characteristics related to the exercise and food environments, and other factors. Findings show that, on average, BMI fell in the New York jurisdictions that implemented a calorie-labeling law compared with those that did not. For example, BMI dropped by an average of 0.4 units among adults living in New York City relative to adults living in the counties belonging to the New York-New Jersey-Pennsylvania Metropolitan Statistical Area that had not implemented a law. Individuals living in these areas in the year before New York City implemented its law had an average BMI of 27.2. Using this as a benchmark, a 0.4 unit drop in BMI translates into a 1.5-percent reduction in BMI. 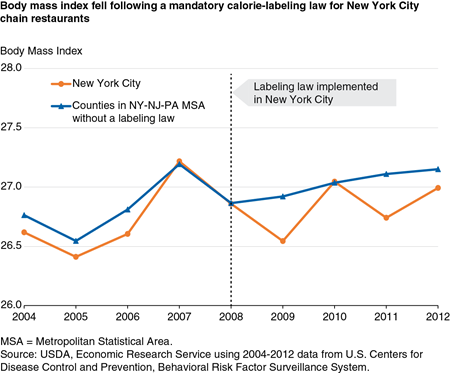