U.S. Upland Cotton Exports and Mill Use Projected To Improve

From 2006 to 2015, upland cotton exports decreased by 34 percent, production by 42 percent, and mill use by 31 percent. Key factors that drove these shifts include: increased competition from foreign producers (where cheaper labor costs resulted in increased textile imports into the United States); prolonged droughts that lowered production (combined with relatively lower cotton stocks); lower import demand from China (a large U.S. cotton importer); and competition from synthetic fibers (such as polyester), which manufacturers are increasingly using in fabric production, including in athletic wear.

While many factors limited cotton market opportunities through 2015, USDA baseline projections through 2026, which provide a long run view of the U.S. farm sector, nonetheless indicate that exports of U.S. upland cotton and mill use are expected to increase relative to the 2006 to 2015 time period. The major factors expected to drive this change are increased global demand from rising incomes and populations and the cotton crop’s reputation of superior quality relative to its competitors. Between 2016 and 2026, U.S. upland cotton exports and mill use are projected to rise by 3 and 7 percent, respectively, while production is expected to drop by less than 1 percent (stocks are also projected to decrease over this period). The United States is forecast to remain the world’s largest cotton exporter with a 26-percent global market share, with Bangladesh, Vietnam, and China projected to import the largest amounts of cotton between 2016 and 2026. 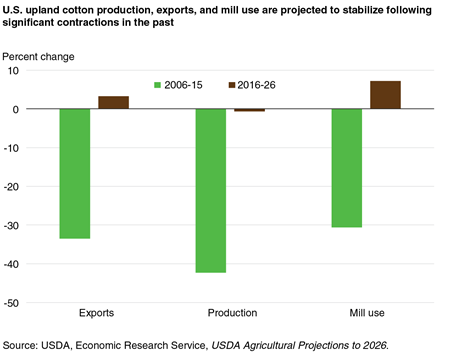