Increasing Americans’ fruit and vegetable consumption has been a long-standing goal of nutrition advocates and health-oriented government agencies. The 2015-2020 Dietary Guidelines for Americans echoes advice from the 2010 and 2005 editions of the Dietary Guidelines that persons needing 2,000 calories per day include 2 cups of fruit and 2.5 cups of vegetables in their daily diets. According to ERS research, however, the average American adult consumes only 1.1 cups of fruit and 1.6 cups of vegetables per day.

Individuals choose foods based on taste, convenience, cost, and other factors. Cost, in particular, has been cited as a possible barrier to increasing fruit and vegetable consumption. Lower income households have reported in surveys that high prices for these foods prevent them from eating more. A recent ERS analysis of average 2013 grocery store prices reveals that 2 cups of fruit and 2.5 cups of vegetables can be obtained for $2.10 to $2.60.

ERS fruit and vegetable price estimates are based on 2013 data from IRI, a market research company. IRI collects scanner sales data from grocery stores, supermarkets, supercenters, and other types of food retailers. ERS used the IRI data to calculate an average retail price across different package sizes, brand names, and types of retail outlets for each of the 156 fruits and vegetables. For example, in 2013, the retailers in IRI’s set of stores sold 114.8 million pounds of frozen broccoli (excluding mixed dishes like broccoli with cheese) for $214.6 million. This equates to an average retail price for frozen broccoli of $1.87 per pound.

To convert average retail prices into costs per cup equivalent, ERS researchers then made adjustments for the removal of inedible parts and any cooking loss that may occur prior to consumption. With frozen broccoli, for example, about 12 percent of the product’s retail weight is lost during cooking. For a fresh apple, weight adjustments were made for removal of the inedible stem and core. 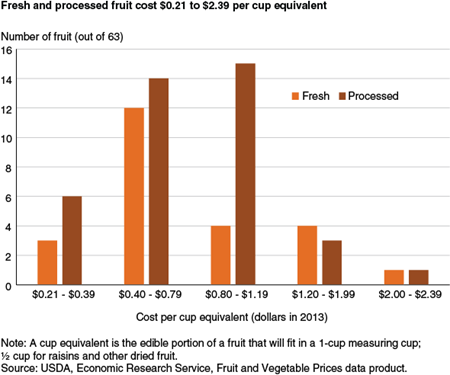 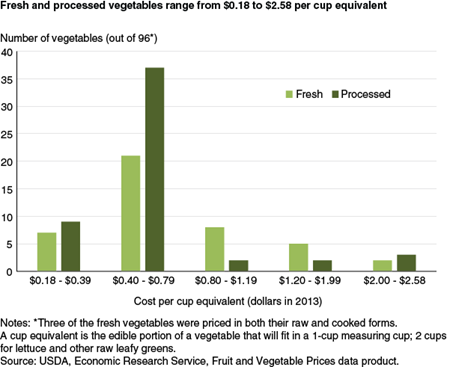 Using estimates of each product’s cost per cup equivalent, ERS researchers generated combinations of fruits and vegetables that would satisfy Dietary Guidelines recommendations for a person on a 2,000-calorie-per-day reference diet. Each daily combination includes 2 cup equivalents of fruit and 2.5 cup equivalents of vegetables. Dark green vegetables and vegetables from other subgroups were included to allow for a more varied diet. Particular consideration was given to less expensive combinations, including those that may be affordable to a household following USDA’s Thrifty Food Plan. The Thrifty Food Plan illustrates how Americans can satisfy dietary recommendations at a minimal cost and is used as the basis for Supplemental Nutrition Assistance Program (SNAP) benefits. Results show that, in 2013, it was possible to satisfy fruit and vegetable recommendations, based on a 2,000-calorie diet, for about $2.10 to $2.60 per day. 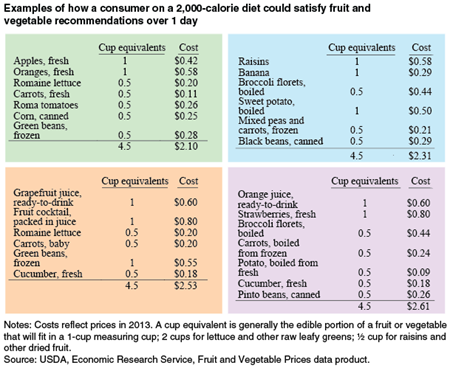