A Bigger Piece of the Pie: Exports Rising in Share of U.S. Apple Production

The domestic market consumes most U.S. fresh-market apples, but export markets have grown in importance for the Nation’s apple growers over the past several decades. U.S. exports of fresh apples have increased steadily during the period, with their share of U.S. production climbing from 14 percent in the mid-1980s to over 28 percent in 2014/15. In terms of volume, fresh-apple exports rose from an average of 607 million pounds in the 1980s to a record 2.3 billion pounds in the 2014/15 marketing year (August-July).The strong growth in fresh-apple exports reflects shifts in domestic supply-and-demand patterns in the U.S. fruit market.

On the demand side, total domestic use of fresh apples has not kept pace with overall fresh fruit demand in the U.S. Per capita use of fresh apples among U.S. consumers has remained almost flat since the 1980s, ranging between 16 and 19 pounds per year.

The weak domestic demand for fresh apples is due in part to increased competition from imports of counter-seasonal fruits. Expansion of fruit production in the Southern Hemisphere, particularly in Chile, boosted the region’s exports to the U.S. during the 1990s and brought more choices to U.S. consumers, especially during the winter months when apples, pears, and citrus used to be the only fresh fruits available. As a result, grapes, berries, and a variety of stone fruit became increasingly available in the U.S. winter market, providing competition for fresh apples. Other once-exotic fruits such as tropical fruit also became increasingly available in the U.S. market year-round. Although apple imports have risen, they still account for less than one-tenth of fresh apple use in the United States.

On the supply side, production of fresh-market apples grew strongly and outpaced domestic demand. With rising output, particularly in Washington State—which accounts for three-quarters of all U.S. apples sold in the fresh market—the U.S. apple industry has increasingly looked to international markets to compensate for weak domestic demand. As part of these efforts, U.S. producers expanded their varietal mix to include, in addition to the traditional Red and Golden Delicious, Fuji and Gala varieties favored by consumers in key export markets. With large volume, broad variety, and high-quality produce, the U.S. industry established a strong presence in international markets and by 2015 was the world’s third-largest apple exporter after Poland and China. In value terms, however, U.S. apple exports are ranked first globally at over $1.0 billion annually in recent years. More than half of U.S. fresh-apple exports go to Mexico, Canada, and India, with Mexico alone receiving more than 25 percent of the U.S. total (in volume terms). Vietnam, Thailand, the Philippines, Hong Kong, and China have also grown as markets for U.S. apples in recent years. With U.S. production of fresh apples likely to continue to increase, particularly in Washington, where high-density plantings have combined with increased planted acreage, export markets will continue to be crucial for U.S. apple producers in the near future. 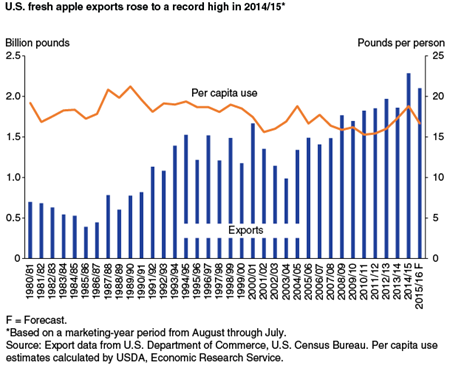