Haiti is a major market for U.S. rice, accounting for about 10 percent of U.S. rice exports and generating around $200 million in revenue for the U.S. rice industry. Nearly all of this rice is from the South, which typically accounts for 75-80 percent of annual U.S. rice production. Haiti is also a country with significant food insecurity—over 6 million Haitians, or roughly 60 percent of the population, did not meet daily caloric intake standards in 2015. Rice imports—which were negligible prior to 1986 due to quantitative limits on imports—have improved the country’s food situation, increasing per capita calorie availability by about 11 percent between 1985 and 2011, according to the International Food Security Database compiled by ERS. Large rice imports also changed the character of the Haitian diet: in 1985, rice accounted for 7 percent of average daily calorie intake; by 2011, this share had risen to 23 percent.

The surge in imports began in 1995, when Haiti reduced its rice tariff from 50 percent to just 3 percent. Annual imports immediately increased by more than 60,000 metric tons to 207,000, with the United States as the dominant supplier. At the same time, Haiti’s domestic rice production has stagnated, with yields averaging 1.83 tons per hectare during the past decade (1 hectare = 2.47 acres). Constraints to productivity growth include small farm size, a lack of financing, poor seed quality, and limited access to fertilizers and machinery. Another constraint is the poor condition of Haiti’s irrigation canals, which are in need of repair and cleaning.

A major goal of the Haitian Government is to boost domestic rice output and reduce dependence on imports. The Government program announced for 2014 included as a key objective the improvement of irrigation and canal facilities. Other objectives included bringing uncultivated land into production, providing subsidized seed and fertilizers to producers, improving access to machinery, and strengthening agricultural advisory services. A number of international projects, including major projects funded by the U.S. Agency for International Development, are assisting in this effort, providing credit, training, and low-cost inputs to farmers. Project leaders claim that participating farmers have seen their yields rise to 3 or more tons per hectare.

However, even with significant productivity gains, Haiti is expected to remain a strong market for U.S. rice. ERS researchers used the International Food Security Assessment model to simulate the impact of a 15-percent increase in Haiti’s rice yields. Model results show the yield increase leads to a 5-percent increase in total grain availability but has only a small impact on the number of food-insecure people in Haiti. Imports under this scenario decline only negligibly. While the yield increase boosts rice output, domestically produced rice makes up a small share of the total grain supply (rice, corn, and sorghum combined), and the country remains dependent on imports for over half its total grain supply. 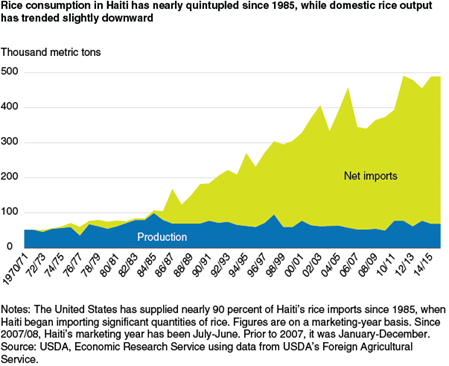