by Annemarie Kuhns and David Harvey

Prices for shell eggs are among the most volatile in the grocery store. While overall grocery store (food-at-home) prices typically do not rise or fall more than 1.5 percent per quarter, over the last 16 years, shell eggs have posted quarterly price changes ranging from an 11.3-percent decline in the third quarter of 2004 to a 20.9-percent increase in the third quarter of 2015. One reason for price swings for retail shell eggs is that they require little processing and, thus, their prices are more closely linked to volatile farm prices for eggs. Additionally, unlike many other retail foods, shell eggs have a limited shelf life—they cannot be frozen or canned. If supplies of shell eggs fall or demand rises, there is limited inventory to draw on and retail prices may rise. Fluctuating consumer demand for shell eggs contributes to prices typically rising at the end of the year for holiday baking and falling again after the Easter holiday.

While some price fluctuations are expected due to seasonal demand for shell eggs throughout the year, there have been some above-average price increases over the past 16 years, mainly due to disease outbreaks affecting poultry or surges in feed prices. In 2003 and early 2004, retail shell egg prices rose sharply—up 14.2 percent in the fourth quarter of 2003—due to Exotic Newcastle Disease, which resulted in egg-layer depopulation. And in 2007 and 2008, prices increased more than 9 percent for three consecutive quarters. It is likely that rising grain prices brought on a decline in egg production as some producers may have switched to lower cost feed that contains less protein. During the same period, prices for the chief ingredients in feed for egg-laying hens—corn and soybean meal—rose 41 and 42 percent, respectively. As rising grain prices affect many retail foods—not just eggs—a corresponding, but muted, increase was also seen for food at home; in the first three quarters of 2008, grocery store prices rose more than 1.5 percent each quarter.

The most recent upswing in retail shell egg prices was largely due to an outbreak of Highly Pathogenic Avian Influenza (HPAI), which affected table-egg-laying flocks, primarily in the Midwest. To contain the outbreak, which ran from late 2014 to June 2015, producers destroyed about 33 million egg layers (roughly 11 percent of U.S. egg-laying hens). As it will take time to replace the lost hens, consumers will continue to see higher prices at the grocery store. Retail shell egg prices rose 20.9 percent in the third quarter of 2015, and egg prices in September 2015 were 36.2 percent higher than in September 2014. As the industry recovers from the outbreak, retail egg prices have begun to adjust, falling 3.3 percent in the fourth quarter of 2015. 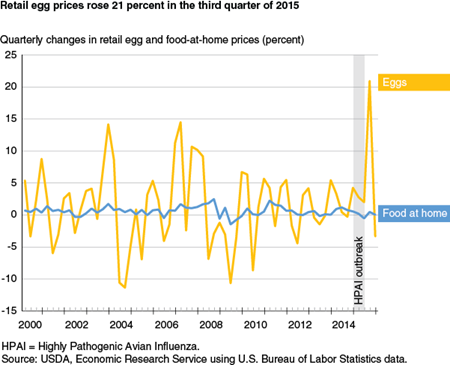