No-Till or Strip-Till Use Varies by Region

by Tara Wade and Roger Claassen

No-till and strip-till are two of many tillage methods farmers use to plant crops. In a no-till system, farmers plant directly into the undisturbed residue of the previous crop without tillage, except for nutrient injection. In a strip-till system for row crops, seeds are planted into narrow strips (typically 6-8 inches) that were tilled and where fertilizer may also be applied. When compared with conventional or other conservation tillage methods, no-till/strip-till production can reduce soil erosion and sediment loss to water and wind; this helps mitigate sediment loading in bodies of water. It can also increase soil carbon sequestration (the amount of carbon retained in the soil) and improve the physical, chemical, and biological properties of the soil in a number of ways, including increased water-hold capacity, higher soil organic matter content, and reduced soil compaction. Maintaining greater residue on the surface reduces soil temperature, maintains soil moisture, and protects the soil from excessive sunlight and wind. 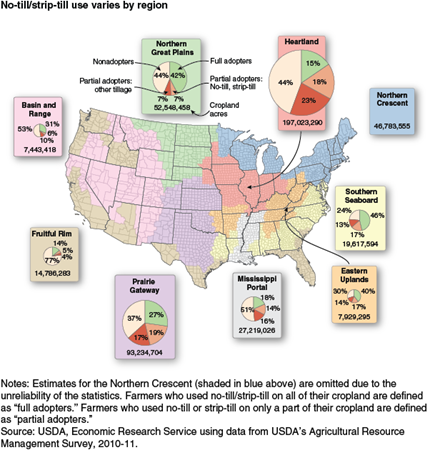