In 2014, Japan imported nearly $3.5 billion of beef and beef products (fresh and chilled beef, frozen beef, and offal), making it the third-largest beef importer in the world. The primary sources for these imports are the United States and Australia, which together accounted for roughly 90 percent of 2014 beef imports in Japan (quantity and value).

These trade patterns could change as a result of the Japan-Australia Economic Partnership Agreement (JAEPA) signed in 2014 and implemented in January 2015. The agreement includes significant and immediate tariff reductions for Japan’s imports of Australian beef. No similar agreement is in place between the United States and Japan. However, Japan and the U.S. are members of the Trans-Pacific Partnership (TPP), a recently concluded (October 2015) but yet to be ratified trade agreement that also includes Australia, Chile, and Mexico, as well as seven other countries: Brunei, Canada, Malaysia, New Zealand, Peru, Singapore, and Vietnam. The extent of tariff reforms for U.S. beef under TPP relative to those that benefit Australia under JAEPA is a central factor in the competitiveness of U.S. beef in the Japanese market going forward.

ERS researchers analyzed potential trade losses for the U.S. beef sector resulting from JAEPA and potential benefits from tariff reform under TPP. Findings reveal strong competition among exporting countries, the intensity of which varies markedly across beef products. For instance, there is price competition across all exporting countries for chilled beef but not for frozen beef or offal. Overall, results show that JAEPA could generate a large increase ($105.9 million) in Japan’s beef imports from Australia and a large decrease ($105.1 million) in its beef imports from the United States. Chilled beef would account for just under half of the decrease ($58.0 million) for the U.S. However, similar tariff reductions for U.S. beef under TPP could eliminate the decline in U.S. exports to Japan and even result in a net increase in beef exports to Japan from both countries. 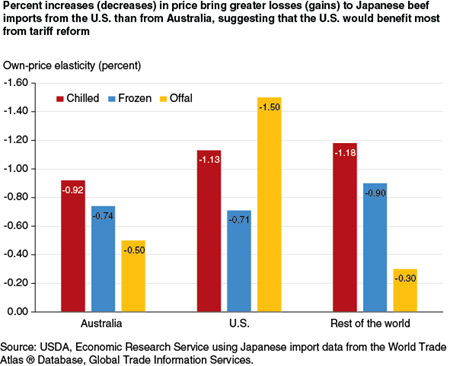